Procter and Gamble Blots Out Women’s Faces To Please Haredim

Procter and Gamble (P & G) placed stickers over the photos of the faces of a woman and a girl on packages of Oral B toothbrushes to please haredi customers. But both the woman and girl depicted are modestly dressed. 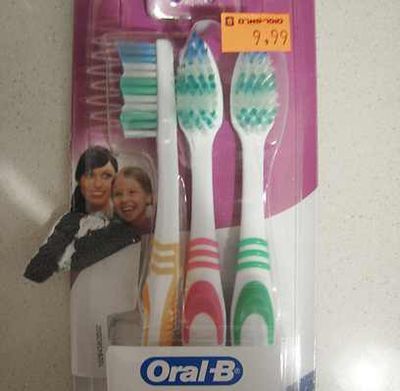 An uncensored Oral B package sold in Israel

A major international corporation, seeking to placate haredi customers in parts of Israel, placed stickers over the faces of a woman and a young girl depicted on toothbrush packages.

Procter and Gamble (P & G) placed stickers over the photos of a woman and girl on packages of Oral B toothbrushes apparently intended for distribution in haredi areas of the country, Ynet reported today.

But some of those toothbrushes ended up in a Super-Pharm in a secular area of Tel Aviv.

A customer purchased a toothbrush, took it home and very methodically and carefully peeled off the stickers to reveal the picture of the woman and girl underneath.

"I bought a package of Oral B toothbrushes and suddenly saw something strange. I noticed a sticker on the left side of the package, which looked completely identical to the color of the box but after a closer glance, I could tell it was a sticker. I slowly peeled the sticker off the box and suddenly noticed a picture of a woman and a girl. The disguise was perfect – It was very difficult to notice the sticker," the customer told Ynet.

The customer contacted Super-Pharm which referred the customer to P & G, which reported told the customer that, “we occasionally package and market our products in order to suit the local clientele. The repackaging can include minor changes in the actual package such as changing the texts and pictures, out of respect to the lifestyle of certain communities. In this incident, the covered toothbrush box was suited to the haredi community in Israel and the package was distributed to several pharmacies in Israel."

Ynet could not find more stickered Oral B packages in Tel Aviv pharmacies. What they did find were plenty of Oral B packages with a picture of both a man’s and a woman’s smiling face.

Haredi newspapers and magazine regularly blot out the faces of women in news photographs or use computer programs like Photoshop to remove women from news photos altogether.

Ads on public buses and billboards that contain depictions of women – even simply the faces of women or little girls – are regularly defaced by haredim.

And haredim have tried to enforce illegal gender segregation in public areas, including on public buses and on public sidewalks.

In Beit Shemesh, women deemed by haredim to be immodestly dressed have been assaulted. Last month, a woman and her small baby were pelted with stones by screaming haredim who called the woman – who was attempting to enter a grocery store – a “whore.”

A similar attack took place there earlier this year, as well.

Also in Beit Shemesh, haredim men repeatedly assaulted small pre-teen Zionist Orthodox school girls, calling them “whores,” and “shiksas” (a derogatory term for non-Jewish women), spitting on them and chasing them down the street.

In all cases, police responded slowly (if at all) to complaints by the female victims.

Some supermarkets in the town have begun to mandate a haredi standard of modest dress for all customers, and have placed large black shawls at the entrances of their stores for the use of customers who are deemed to be immodestly dressed by store security staff.

Procter and Gamble Blots Out Women’s Faces To Please Haredim

Procter and Gamble (P & G) placed stickers over the photos of the faces of a woman and a girl on packages of Oral B toothbrushes to please haredi customers. But both the woman and girl depicted are modestly dressed.