"Impoverished neighborhood settings, combined with high drop-out rates, constitute surefire prescriptions for youth violence in any context, suggests a professional who works with young Haredi drop-outs. 'Now this rule applies to the haredim.'" 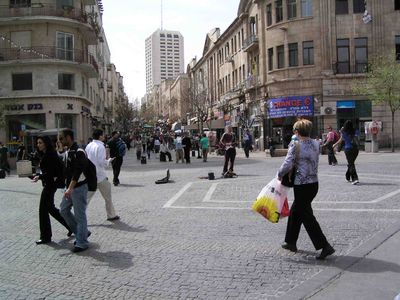 Ten days ago, a large mob of Jewish teens attacked and almost killed three Arab teens in downtown Jerusalem's Zion Square. One of the victims, Jamal Julani, was left in a coma from the attack.

Now it turns out that some of these Jewish teens, including the two lead attackers, are from haredi homes.

…The third young woman, the one who is still being detained, comes from an ultra-Orthodox family with two working parents. Until a few months ago, she studied at the Beit Yaakov seminary.

The young woman indicates, as does the prime male suspect, "A" (who also comes from an ultra-Orthodox home ), that drop-outs from religious seminaries and yeshivas should not be regarded as harmless idlers, as Haredi leaders depict them. They have a disposition for grave acts of violence, the two suspects indicate.

Indeed, impoverished neighborhood settings, combined with high drop-out rates, constitute surefire prescriptions for youth violence in any context, suggests a professional who works with young Haredi drop-outs. "Now this rule applies to the Haredim," he points out.…

"Regrettably, there are demonstrations of racism in our public," [a female haredi teacher from Jerusalem] says, noting that in this neighborhood an Arab housekeeper was forced to leave under the accompaniment of her male employer, due to fears that she might be attacked. Yet this teacher says that contempt for Arabs never translates as physical violence. "The most that happens are verbal, racist denunciations," she says.

But poverty and being a haredi yeshiva/seminary dropout aren't the only indicators for propensity for racist violence, as Rotem herself notes about a group of Bnei Akiva Orthodox Zionist teens from the south of Israel that she interviewed in Zion Square:

…"It's very good that they [the Jewish assailants] hit them," said one young man. "It's just too bad they didn't kill them," he added.

"Had I been there, I would have killed them," boasted another young man in the group.

The Bnei Akiva youths said they wouldn't have tried to stop the assailants who beat the Arabs - in fact, many agreed they would have joined the perpetrators. "Arabs are terrorists who carry out attacks and want to murder all of us," they explained

As they spoke, their counselor kept silent, never interrupting to denounce the attack.…

"Impoverished neighborhood settings, combined with high drop-out rates, constitute surefire prescriptions for youth violence in any context, suggests a professional who works with young Haredi drop-outs. 'Now this rule applies to the haredim.'"