Cartoon Images Of Women No Longer Kosher For Passover?

The iconic, stylized cartoon logo of a modestly dressed woman sprinkling salt has been removed from Salit salt packages sold in some haredi stores. 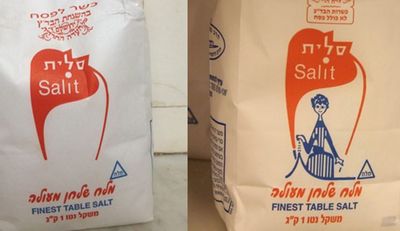 The often illegal exclusion of women from public life in Jerusalem and other areas of israel with large haredi populations is fueled by haredi demands for illegal gender segregation in public spaces and new haredi hyper-understandings of “modesty.”

That exclusion of women has now reportedly caused a major Israeli food company to remove part of its iconic logo.

But some packages being sold in haredi stores are missing the drawing.

The drawing wasn’t covered by a sticker or blocked out with a marker – increasingly common occurrences on toothbrush packages, cereal boxes and other retail products’ packaging that are sold in haredi stores.

Instead, Salit completely removed the drawing – which is part of the company’s longstanding and iconic logo – by printing entirely new packaging.

Salit is owned by Israel Salt Industries, the country’s largest salt manufacturer, which is owned by Shari Arison’s Arison Group. The Arison Group is also the controlling shareholder in Bank Hapoalim, which recently reportedly removed a female actress from its billboards in Bnei Brak.

Salit claims the packaging change was done to distinguish Passover and non-Passover salt.

“The character of the woman was removed from the packages of Salit table salt that are kosher for Passover under Badatz [the rabbinical court of the rabidly anti-Zionist Edah Haredit faction] supervision, so as to create a distinction between Passover and non-Passover products. Packages of Salit table salt that are sold throughout the year under Badatz supervision bear the image of the woman,” a Salit spokesperson told Ha’aretz.

Cnaan Advertising, which has the contract for advertising on all public Egged buses in Jerusalem, recently was forced to restore women's photographs and depictions to bus ads in the capital after women's groups and open society advocates filed a petition with the High Court of Justice.

Cartoon Images Of Women No Longer Kosher For Passover?

The iconic, stylized cartoon logo of a modestly dressed woman sprinkling salt has been removed from Salit salt packages sold in some haredi stores.
Failed messiah was established and run in 2004 by Mr. Shmarya (Scott)Rosenberg. The site was acquired by Diversified Holdings, Feb 2016.