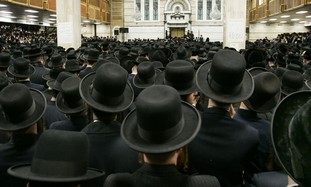 Haredi Male Employment Up By 28% – Or Is It?
Shmarya Rosenberg • FailedMessiah.com

But is this really good news?

Buried at the bottom of the Ha'aretz story on this "28%" increase are two important facts: 1) The Bank of Israel changed the way it counts haredim (or, more properly, relied on a change the government made) making its definition of who is haredi more expansive, accounting for almost all of the increase. 2) Actual economists seem to agree that the new numbers are inflated.

In other words, intentionally or not, the books were cooked:

…It is important to qualify that among Israeli labor market experts, the official employment rate of 45 percent for Haredi men appears to be inflated. The explanation provided by the Bank of Israel for its employment figure was that it relied on the Central Bureau of Statistics' expanded definition of "ultra-Orthodox" to categorize work survey respondents. According to the Bank, if a more restrictive definition of ultra-Orthodox were to be used the employment for Haredi men would be 38 percent.

Tel Aviv University economist Professor Eran Yashiv, an Israeli labor market researcher, states that in light of the rapid pace of growth in the Haredi population, a huge amount of new labor market entrants for the Haredi would be required for the male employment rate to reach 45 percent.

"It doesn't sound or appear logical," says Yashiv. "We don't have on-the-ground information that would point to a massive entrance of Haredi men into the workplace. This sounds too good to be true, so I am a bit doubtful."