The bus company that provides public bus service in Israel’s capital will not run ads on its buses that have any pictures or depictions of any human beings – even males or babies. Yerushalmim's ads depicting women in short sleeves are, “outrageous and defiant,” Egged claims. 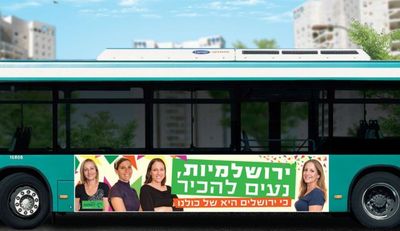 The disputed “outrageous and defiant" ad, in a simulated bus posting, above, and in closeup, below

Egged, Cnaan Media Dodge High Court Appeal, Refuse To Run Ads Depicting Women – Again
The bus company that provides public bus service in Israel’s capital will not run ads on its buses that have any pictures or depictions of any human beings – even males or babies.
Yerushalmim's ads depicting women in short sleeves are, “outrageous and defiant,” Egged claims.
Shmarya Rosenberg • FailedMessiah.com

Canaan Media and the Egged bus company have reportedly decided to evade a High Court of Justice appeal forbidding it from censoring out all images of women on ads placed on Egged buses.

Just two weeks ago, Cnaan announced that it would run an ad campaign on Egged’s Jerusalem buses from the Yerushalmim movement. The campaign features pictures of women.

Yerushalmim had petitioned the High Court eight months ago against years of Cnaan censorship.

But Cnaan and Egged did not run the ads, allegedly because of a “dispute over the length of sleeves” worn by the women depicted in those ads.

Instead, they have now reportedly decided instead to stop using any photos of any people, men or women, on Jerusalem bus ads from now on, Ha’aretz reports.

Yerushalmim’s petition to the High Court sought to mandate Egged and Canaan Media to display its ad campaign that features photos of women and the slogans “Jerusalem women, pleased to meet you,” and “Because Jerusalem belongs to all of us.”

Shortly after agreeing to run the ads, Canaan Media said it had doing so until the sleeves of the women could be lengthened.

“In negotiations with them, they wouldn't agree to put up photos of women in tank tops, so we said 'OK, put them in T-shirts,' because we wanted to go ahead with the campaign,” Yerushalmim’s head, Rabbi Uri Ayalon told Ha’aretz.  “Then they wanted to lengthen the sleeves to the elbow.  We could not agree to that.”

In correspondence between Cnaan and Yerushalmim seen by Ha’aretz, Canaan Media said that its agreement with Yerushalmim to run the ads had expired. It also claimed that Egged had decided not to use any human images, male or female, from now on.

And in a letter written in late July to the Canaan’s CEO, Egged’s marketing manager Eyal Yehiel wrote that, “…In the Jerusalem area there will be no human images at all, though in other parts of the country it will be possible to use such images.…”

Canaan Media said that due to the appeal to the High Court and fears haredim will vandalize buses that have ads with women pictured in them, it had to cut back advertising on Egged buses.

Canaan also made it clear to Yershalmim’s attorney that even if Cnaan is forced to run the Yerushalmim ads, they will be the last ads to use human images – especially images of women – on Jerusalem buses.

Egged was even more clear in a statement made by its spokesman to Ha’aretz.

“The agreement displays no discrimination against men or women. Canaan’s concession is set to end in October 2013. Until then, our legal advisers suggested we forge a new arrangement with Canaan. [For the time remaining] The need for a new arrangement arose from the real and pertinent danger to which the public and bus drivers in ultra-Orthodox neighborhoods are exposed, as well as our desire not to violate a High Court decision against discrimination. Therefore it was decided that advertisements will only featured on the back of buses, and without any people, in order to prevent unnecessary arguments and rifts. A bus’ purpose is to transport passengers, not to be a platform for outrageous and defiant advertisements. At the end of the concession, we will reconsider using city buses as a platform for advertisements.”

The bus company that provides public bus service in Israel’s capital will not run ads on its buses that have any pictures or depictions of any human beings – even males or babies. Yerushalmim's ads depicting women in short sleeves are, “outrageous and defiant,” Egged claims.
Failed messiah was established and run in 2004 by Mr. Shmarya (Scott)Rosenberg. The site was acquired by Diversified Holdings, Feb 2016.