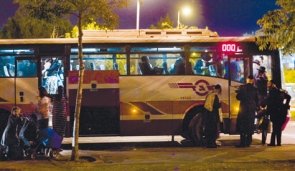 A haredi man blocked the front door of the bus and refused to allow her to board. The soldier reportedly persisted and eventually got on the bus, only to be harassed by haredim on board who complained about her clothes and complained that she had boarded the bus. The haredim also tried to force her to go to the rear of the bus.

The soldier was not in uniform at the time of the incident.

As the harassment intensified the soldier reportedly began to cry. When the harassment still did not stop, she left the bus – which was operated by Egged Ta’avura, the subsidiary of the Egged bus company which was the operator of the gender segregated “mehadrin” public buses in Jerusalem that were ruled illegal by the High Court of Justice – to escape it.

Friday’s incident was first reported by Army Radio and then by The Times of Israel.

The girl’s mother told reporters that the bus driver saw what was happening to her daughter but did not try to stop the harassment.

Last month, for the first time an Israeli court awarded compensation to a young girl after she was forced by haredim to sit at the back of a bus in Beit Shemesh. The judge ruled that it is the bus driver’s responsibility to prevent forced gender segregation from taking place.

Haredim in Beit Shemesh have repeatedly harassed and assaulted non-haredi women. Last month a mob of haredim there stoned a young woman and her infant, and similar attacks – along with spitting attacks on little pre-teen girls – has been common there.

An Egged spokesperson told Amry Radio that its director-general had spoken to the soldier and to her mother, and the incident, the spokesperson claimed, is being investigated.