Exclusive: The Life And Suspicious Death Of Howard Frank 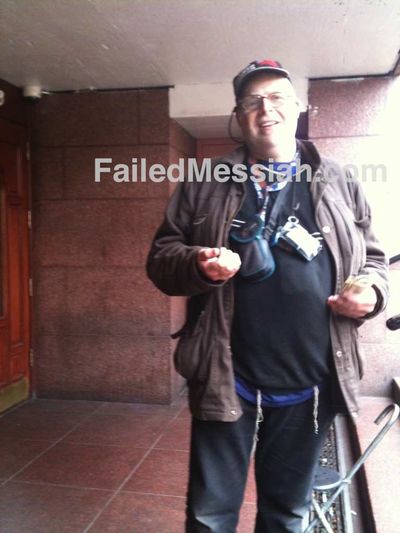 The Life And Death Of Howard Frank
Shmarya Rosenberg • FailedMessiah.com

Last Thursday morning, June 28th, the body of Howard “Chaim” Frank was pulled from the Gowanus Canal in Red Hook, Brooklyn. He was clothed, including tzitzit. His wallet was in his pocket. Water was in his lungs, meaning he entered the water – probably in Sunset Park, I’m told – alive.

Howard Frank was moderately mentally ill. He had a unique and exceedingly valuable collection of entertainment industry photographs and had coauthored a book on the 1960s sitcom, "I Dream of Jeanie."

Howard Frank was also a beggar, and he was last seen alive leaving Landau’s shul on E. 9th near Avenue L in Brooklyn, a favorite begging spot, at about 10:30 pm Wednesday, June 27th.

“They’re going to kill me,” Howard Frank told people as he left, “I’m a dead man.” It was talk none of them had heard from Frank until then.

He owed, I’m told, $80,000 to one man, and possibly more to others – some of whom may be far from savory people. Loans were due, he had to pay back, and he didn’t have the money. He was, according to one account, recently coerced into signing a will that left a portion of his valuable photo collection to one of those lenders on the event of Frank’s death.

He had been nervous for days, pacing, often frantic. He spent the Shabbos before his death at a rabbi’s house in Brooklyn. He had known this rabbi for a long time, and considered him a friend. Throughout Shabbos, Frank paced up and down, unable to sit still, unable to turn off the fear.

“The rabbis said they’d help me [with money], but they didn’t, and now I’m a dead man,” Frank told people in the hours before he died.

Years before, Frank became homeless after an eviction. He begged rabbis to find a Jewish family who would take him in. It didn’t happen.

Instead, Frank – who refused all government assistance – was taken in by a non-Jewish man he had recently met at a flea market, a man with very extreme right wing political views and survivalist tendencies.

I was shown a picture of Howard Frank standing in that man’s house next to an Eastern Orthodox cross and other iconography. The picture was titled, “Chaim’s Home.” He meant to have it sent to various haredi and Orthodox Jews as a plea for help.

Frank owned what appears to be the largest known collection of still photographs from television shows and other entertainment venues, having at least one picture – and often many more – from every television show broadcast from 1948 through 1990 – more than one million photographs in all. He had begun collecting them as a boy, writing away to television production companies and networks to ask for pictures. As an adult, he leased these pictures to magazines, book publishers and movie and television production companies.

Many Orthodox rabbis knew about Frank's photo collection and its value.

Frank’s ability to run his business deteriorated after his eviction, and his new friend who gave him shelter began to assume control of it.

When his body was pulled from the water last Thursday, cops and the coroner saw his tzitzit. One of them or someone at the medical examiner’s office allegedly called Misaskim, the haredi organization that blocks autopsies and helps arrange (and sometimes pay for) funerals and shiva minyans.

Misaskim was in contact with at least one of the rabbis who knew about the photos and their value, and other knew Howard Frank was dead. Misaskim allegedly made sure that no autopsy was done, even though Frank's death was suspicious. Instead, Misaskim saw to it that Frank’s body was released by the M.E. in time for a Sunday burial.

Frank’s brother, an Orthodox Jew, was not consulted and was not allowed to have any say in the funeral planning. No one even told him his brother died.

By late Friday afternoon, Frank's brother was very worried. Howard, the only immediate blood relative he had, was missing. He started calling people, looking for him. Just before 5:00 pm, he called the cell phone of a rosh yeshiva in Brooklyn whose yeshiva both he and Howard had once worked for, and both were still in regular contact with.

"We know where your brother is, he's in the morgue," the rabbi said. "Misaskim is looking for you."

I spoke with several people who knew Howard Frank well, including some who were the last to see him alive. Frank had never been suicidal as far as any of them knew. He had never spoken of suicide or threatened it.

I spoke with Howard Frank several times over the past two years, usually about alleged mistreatment of other beggars by synagogue officials and rabbis, and sometimes about his own problems with housing. He’d call me, sometimes pitch a story, and almost always wonder why all the good things he’d once learned in Jewish law and in various hasidic and mussar tales about caring for the poor didn’t seem to be true in real life. In the holy books, rabbis and Jews really cared. In real life, that didn’t seem to be truth, at least not as Howard Frank often experienced it.

In the hours before his death, his concerns were clear: the money he owed but couldn’t repay, the meeting he dreaded, and his fear that he would be seriously maimed or murdered in proximity to it.

Howard Frank entered the water in or near Sunset Park Brooklyn. He was alive. Thursday morning his body was found, floating in the murky water, about a mile away.

Did Misaskim’s intervention conceal it?

I asked NYPD spokesman Paul Browne by email at 10:41 am CDT this morning to confirm or deny a narrative of events leading up to Frank’s death, and to speak to Misaskim’s role in blocking autopsies – especially in a case where the death is suspicious.

After several hours passed without a response, I called him. An assistant took a contact phone number. I mentioned the email and said he could reply to it rather than call, if it was easier for him – something the assistant appreciated. But as of 9:15 pm CDT tonight, Thursday evening, Paul Browne had done neither.

Exclusive: The Life And Suspicious Death Of Howard Frank