Stephen Spector, an academic who wrote a well-reviewed book on Operation Solomon, the 1991 airlift was supposed to rescue the last of Ethiopia's Jews, omits facts and shades the truth in order to make Israel – and Yitzhak Shamir, who died Saturday – look as if saving Ethiopian Jews was a high priority for them. But that is an absolute, demonstrable lie – and Spector must know it. 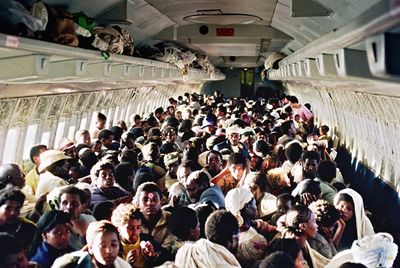 Inside a plane during Operation Solomon in May, 1991

Not much has been written about the actual history of the various rescues and airlifts that saved Ethiopian Jews.

Even in Israel that is true, and most Ethiopian Jews know next to nothing about how they were really rescued.

Israel often claims both Operation Moses (1984) and Operation Solomon (1991) as their own, when in truth both were initiated by the US and paid for by it, not by Israel. (Funds raised by Jewish Federations to support these airlifts went into absorption in Israel – or were sometimes embezzled by Jewish Agency departments and officials and others involved.)

In fact, Israel resisted Operation Moses and Yitzhak Shamir, who when then acting Prime Minister, did some of his famous foot-dragging leading up to it.

Stephen Spector, a professor of English and author of a well-reviewed book on Operation Solomon, uses Yitzhak Shamir's death to tell part of the story of these airlifts.

Unfortunately, the parts of these stories Spector does not tell don't make Shamir or Israel look very good. And that's why Spector omits them. Here's an example:

“But the Sudanese halted that mission [1984's Operation Moses] after it was revealed publicly. Since then, the aliyah had slowed significantly…”

Spector has no word for who revealed the airlift, so I'll fill in what Spector omitted:

1. Yehuda Dominitz, a senior official in the settlement movement and a senior member of the National Religious Party (NRP) who printed the story in a settler publication despite what was supposed to be a government blackout on such news. He was never punished or sanctioned.

3. The Washington Jewish Week, who reported the story it had been told by an Israeli government proxy, even though the NY Times and several other major dailies, when told the same story earlier, called the US Department of State, concerned that publicizing the airlift would kill hundreds of people – a fact the State Department quickly confirmed. The Washington Jewish Week, however, did not care all that much about that warning and the plea not to do its story. Why didn't the WJW care? Because Israel didn't care.

4. The quasi-governmental World Zionist Organization, which held a press conference to announce the operation under the guise of claiming that being open about the airlift a few weeks after the previous leaks was a good thing. It wasn't.

5. Shimon Peres, who held a press conference shortly after the WZO's for the same exact reasons. It was Friday, January 5, 1985. The airlift was ended by Sudan – not Ethiopia – the next day.

6. Yitzhak Shamir, who was trapped into doing the rescue by the US and who found his way out  through those leaks.

Spector omits all this because he can't use this information to praise Israel or Shamir. He also can't use it because it makes it much harder to demonize the American Association for Ethiopian Jews, something Spector goes on to do:

…shortly after the renewal of Israeli-Ethiopian ties, an American non-profit organization called the American Association of Ethiopian Jews took steps to force Israel to act more quickly to enable the Ethiopian aliyah. Without consulting anyone (at least not officially) they dispatched agents to the Jewish villages in Gondar, urging people to come to Addis Ababa at once. They paid for trucks, buses, and boats to bring them down by the thousands. Others made their way on foot, or sold their possessions to pay for bus tickets and bribes. Once the migration began, none of the Falashas wanted to be left behind. They said later that they had risked everything because they wanted to go to Jerusalem. Their ancestors had yearned to go to Zion, and this was their chance.

Within months, nearly the entire Jewish community (as it was then recognized), some 20,000 people, made their way to Addis, a sprawling, impoverished shantytown already swollen with refugees from the long civil war. There was no sufficient infrastructure to accommodate them. Nor was there enough food, clothing, or medical services. The Ethiopian Jews expected the Israelis to reunite them with their children and other family members quickly. Instead, they became subject to international forces of which they were entirely innocent. Israeli and American officials quickly concluded that Mengistu had realized he could hold the Jews hostage in order to demand weapons from Israel. The Falashas thus became living chips in a game of international political poker in which the stakes were the Ethiopian government’s survival, and their own. Thousands of them spent up to a year or longer in degrading slum conditions. Many children died.…

What Spector doesn't tell you is that in late 1983 and early 1984, Israeli agents told Ethiopian Jews to flee the famine and unrest, urging them to walk to UN refugee camps in neighboring Sudan. Almost 15,000 did.

But those Ethiopian Jews were met with appalling conditions in those camps, including a lack of potable drinking water and the presence of Islamic terrorists.

And Ethiopian Jews began dying, many of them children.

In 1984, months before there was any rescue operation in place,  I was asked to write an opinion piece for the New York Times on the plight of Ethiopian Jews.

I was a senior official of the World Union of Jewish Students (WUJS) in North America and would be writing the piece in that role.

WUJS had NGO status at the UN and its Israel affiliate was treated by the government as the legitimate representatives of Israel's university students.

I agreed to write the Times' piece, as long as there was no serious objection from the rest of the North American executive. There wasn't.

But before the Times' piece could run, I was contacted by someone who was closely connected to Israel's government and Likud.

He asked me withhold the piece, to have the Times not publish it. There was a problem, he claimed, that came from WUJS' NGO status, and the government wanted the piece pulled.

The messenger – who I knew well – then made an offer. Israel would get clean water into those Sudanese refugee camps if I pulled the Times piece.

It was a simple quid pro quo. I don't publish the Times piece and Israel thanks me by getting water purification measures into the refugee camps.

I had a choice.

Run the piece in the Times and hope the "sunlight" would  help spur a rescue or take Israel at its word.

If I chose to publish the piece, lots more people might die from dysentery and other diseases, and it was no slam dunk that a piece in the Times would be enough to spark a rescue.

On the other hand, even though I didn't trust israel when it came to saving black African Jews, I did trust the messenger. I did not believe he would knowingly lie to me.

In the end, I called the Times, spoke with the editor at the Opinion's section and pulled the piece.

He was incensed, because he believed Israel was lying.

I told him he was probably correct, but that I had to take the chance in the hope that clean water would really become available in those camps.

No clean water or water purification systems arrived in those camps. People – mostly small children and the elderly – just kept on dying.

The prime minister during all this?

To say Operation Moses was an Israeli rescue operation is like saying the French and the Poles won WW2.

To say Operation Solomon was Israel's rescue isn't all that much different than that. Israel flew planes but the US made those flights possible.

As for the AAEJ's move to gather all the Ethiopian Jews in Addis Ababa, if it had not done so, Ethiopia's Jews would not have been rescued.

Spector tries to make it seem if the AAEJ was wrong, as if it acted rashly and impulsively and got Jews killed. Spector does this the way he always does such things: by telling only partial truths.

As for Shamir, he greeted the first planeload of Ethiopian Jews in Operation Solomon, made a fine, brief speech, and went home. Many Ethiopian Jews, not knowing any better, saw Shamir as a savior.

But saving Ethiopia's Jews was not a priority for Shamir.

In fact, the opposite is true.

In the last week of 1986, WUJS held an international convention in Jerusalem. Shamir, who was then prime minister, came to speak.

We wanted to publicly give Shamir a letter calling on the Government of Israel to do more to rescue Ethiopian Jews.

Shamir warned that the cost would go up if we did it.

"Give him the letter when he speaks," I repled. "If it costs more, it costs more." There was no way I would make a similar mistake to the one I made two years earlier with Times.

Operation Solomon turned out to be 4 1/2 years away.

The only Prime Minister of Israel who relally wanted to rescue Ethiopia's Jews was Menachem Begin. That is the sad truth.

As for Spector, that truth is there for him to report and has been for years. He just doesn't seem to be all that interested in reporting much of it.

Stephen Spector, an academic who wrote a well-reviewed book on Operation Solomon, the 1991 airlift was supposed to rescue the last of Ethiopia's Jews, omits facts and shades the truth in order to make Israel – and Yitzhak Shamir, who died Saturday – look as if saving Ethiopian Jews was a high priority for them. But that is an absolute, demonstrable lie – and Spector must know it.