« Breaking With Hasidism: How The Internet Helped A Hasidic Woman Think – And Flee | Main | Hasidic Rebbe Decries "Malicious Plans" Of The Secular Government To "Stick [Its] Paws" In Yeshivas And Draft Haredim »

The same people who dressed their children in Holocaust death camp uniforms and yellow star patches will now handcuff them together in a bizarre protest against drafting haredim. 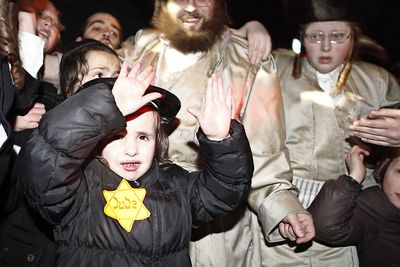 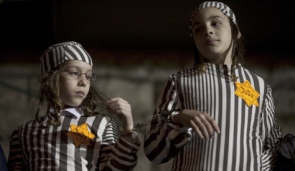 A reporter from Ynet went to the haredi Hebron Yeshiva in Jerusalem to talk to students about the looming military draft.

What did this haredi yeshiva students tell him?

That they don’t believe they’ll really be drafted, that the haredi community already does enough for Israel without serving in the army, and that while haredim appreciate the non-haredim who do serve in the military, haredi Torah study also protects Israel, just like the army does:

'It's certainly possible that the public will want the haredi public to enlist, but we don't think we need to enlist or that we will enlist. We are very appreciative of those who enlist and of what they do, we 'get' them and love them, but we would like them to try and understand that there's a good population here that carries out endless acts of charity, tries to have a positive influence and yet is only ever thought of for one thing – lack of military service. This [haredi] public that has Hasdei Naomi [charity for indigent children], Yad Sarah [that loans free of charge wheelchairs and medical devices to families and individuals in need], Hatzolah [the private haredi ambulance and EMT service] – consider for a moment whether that kind of public is 'worthy' of the title of parasite, or perhaps behind it all there are values and principles,” haredi yeshiva student Shmuel Degani told Ynet.

"We need to create dialogue. Honestly, we really do appreciate those who give their lives to protect us and our families, but we also do our part, maybe on an even higher level, with true faith that the Torah protects the land [of Israel],” haredi yeshiva student Yossi Yalon added.

Elsewhere in Jerusalem, the haredi umbrella group Edah Haredit, based in the Mea-Shearim neighborhood of the city, has decided it will handcuff 2,000 little children in Jerusalem next Monday as a protest against drafting haredim. Several months ago, Edah Haredit dressed little children as death camp inmates complete with yellow stars labeled “Jude” to protest the government.

Haredi leaders are also trying – so far unsuccessfully – to organize a unified haredi protest they’re calling a “million man” protest, in which every haredi faction would join and unite to protest the draft.

Haredi leaders object to any haredim being drafted into the Israel Defense Forces, maintaining that yeshiva study is more important and that it provides its own superior protection for Israel.

The same people who dressed their children in Holocaust death camp uniforms and yellow star patches will now handcuff them together in a bizarre protest against drafting haredim.