Haredim Drain Welfare Benefits Away From The Truly Poor

Israel’s poor receive far less welfare than the poor of other first world countries and suffer because of it. 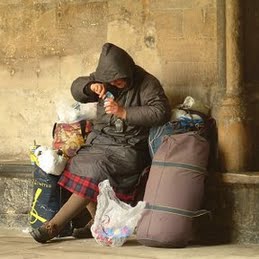 Elderly, poor and homeless in Israel

Haredim Drain Welfare Benefits Away From The Truly Poor
Israel’s poor receive far less welfare than the poor of other first world countries and suffer because of it.
Shmarya Rosenberg • FailedMessiah.com

The head of Israel’s National Insurance Institute, effectively Israel’s national social welfare bureau was interviewed by the Israeli business daily Globes in response to the suicide of Moshe Silman, a totally disabled Israeli who set himself on fire to protest Israel’s terribly inadequate care for its weakest citizens.

Silman received total welfare payments of NIS 2300 ($576) per month and was expected to live on it.

"An allowance of this amount is not enough to live on. In Israel, National Insurance is meant as the last safety net because you have nothing, but this safety net is minimal. I am aware of this,” NII head Prof. Shlomo Mor-Yosef told Globes.

“We recently examined the level of welfare payments in the past decade,” Mor-Yosef said, “and found that, even after adjusting for demographics and inflation, the amount of welfare payments rose by an average of 10% in real terms. Most [of that increase] was in child allowances and disability allowances.”

Haredim get the majority of those child allowances. They also receive other welfare benefits. Because many haredi men do not work, they pay little in taxes. And unlike the truly poor who cannot find work or who are limited due to illness or disability, haredim choose not to work, opting instead to study for decades in yeshivas. Those yeshivas and the haredi students themselves are also subsidized by the state – meaning the overall haredi drain on Israel’s social welfare budget and its economy is massive.

“Ultimately, there is only one pie,” Mor-Yosef said.

Haredim Drain Welfare Benefits Away From The Truly Poor

Israel’s poor receive far less welfare than the poor of other first world countries and suffer because of it.