« Chabadniks Plead Guilty In Mortgage Fraud, Face Up To 30 Years In Prison | Main | Petition Asks Secretary of State Clinton To Intercede On Behalf Of 4 Children Allegedly Kidnapped With The Help Of Chabad »

Exclusive: The Chabad Chief Rabbi And The Prostitute?

A recording is purportedly made of Rabbi Berel Lazar, Chabad's 'chief rabbi' of Russia, having phone sex with a prostitute. Is it really him? Lazar tells me it isn't. But there's more to the story. 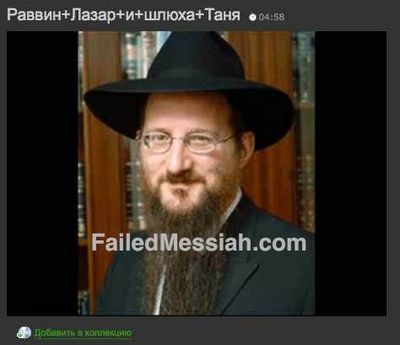 Someone, I don't know who, posted an audio recording on a Russian website, claiming the man on the recording is Rabbi Berel Lazar, Chabad's 'Chief Rabbi' of Russia.

A link to the recording was sent to me Wednesday. I couldn't tell with complete certainty if the voice was Lazar's – although it did seem to be him.

Later Wednesday, I asked Lazar by email and then by phone about the recording.

He told me that the recording had been around for months, that he had listened to it, and that it is not him.

"It's not my voice and it has nothing to do with me," Lazar said.

He also told me that there are people in Russia who specialize in impersonating people for purposes like this.

Also on Wednesday, I asked Rabbi Yehuda Krinsky, the head of Chabad worldwide, for comment on the purported Lazar sex tape. He did not respond.

Lazar told me Wednesday that an unspecified "they" were doing things to "us" in Russia, and he offered to show me evidence of this in person.

I told him I couldn't fly to Russia.

Lazar responded that he is in the US, and that if I couldn't come to New York, he would try to come to me. We agreed that Lazar would let me know by Friday morning when this meeting would take place.

I heard nothing from Lazar Thursday, Friday or Saturday after Shabbat.

So I went back to the Russian website to listen to the tape again – but the file was missing.

And that might be the end of the story, except for a couple key facts:

1. I made a screenshot of the Russian webpage when I first saw it Wednesday.

2. I made an audio recording of that file, just in case Chabad got it removed from the Russian webpage.

So, without further ado, here is my recording of the Russian audio tape purporting to be Berel Lazar and a prostitute having phone sex. The recording is 5 minutes long. Please click the gray bar to listen: 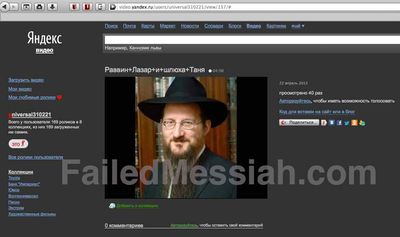 And here is a screenshot of the same webpage made at 3:14 am CDT this morning. The Russian text reads "Clip not available.":

Update 3:12 pm CDT – To be clear, here is a timeline of what happened:

1. I was emailed a link to the alleged Lazar sex tape Wednesday morning by an anonymous person.

2. Just before 1:00 pm CDT I emailed Lazar and Rabbi Yehuda Krinsky asking if this was in fact Lazar's voice, and asking for comment.

3. Lazar quickly responded that ihe voice was not his. He asked for my phone number. I gave it to him.

5. During that call he again denied that the voice is his. He also spoke about "they" doing bad things to "us" in Russia, and offered to explain that to me and show me evidence of it if we could meet in person.

6. I told him that I couldn't fly to Russia.

7. He said he was in the US and would meet with me in New York or in another location that would work for me.

8. I suggested that we meet in Minnesota because he has relatives here and could visit them before or after meeting me.

9. He told me he would see if he could arrange that and promised to get back to me.

10. I responded that we needed to set a deadline we both could agree on for him to make whatever arrangements he needed to make and to get back to me.

11. Lazar was fine with that and suggested Friday morning Minnesota time as the deadline – meaning that from noon CDT onward I could post on the alleged sex tape without breaking our agreement.

12. I agreed, but asked him if he was really sure that a deadline set at Friday morning Minnesota time would work for him.

13. Lazar said Friday morning Minnesota time was what he wanted.

14. I agreed, and promised that I would not post before noon my time on Friday.

15. Rabbi Krinsky did not respond to my questions.

16. Lazar did not keep the agreement. He did not call me or email me to set a meeting, to say that he had changed his mind, or even to ask for more time. He made no attempt to contact me at all.

17. At about 3:00 am CDT this morning, I went back to the Russian website to listen to the alleged Lazar sex tape again. It was no longer posted.

19. I waited a total of more than 40 extra hours, from noon on Frday until 4:18 am CDT today, before finally posting on the alleged Lazar sex tape – 87 hours from the time Lazar first responded to me, about 89 hours after getting the original email with the link to the sex tape.

Exclusive: The Chabad Chief Rabbi And The Prostitute?

A recording is purportedly made of Rabbi Berel Lazar, Chabad's 'chief rabbi' of Russia, having phone sex with a prostitute. Is it really him? Lazar tells me it isn't. But there's more to the story.