Police tell Howard Frank's brother that the investigation into his brother's suspicious death is now being closed, and that Howard Frank's death is being ruled a suicide – even though Frank told people in the hours before he died that he was "a dead man" and that people were going to kill him. 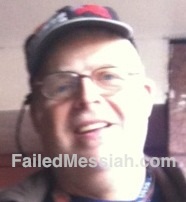 Police have now told Howard Frank's brother that the investigation into his brother's suspicious death is being closed, and that Howard Frank's death is being ruled a suicide – even though Frank told people in the hours before he died that he was "a dead man,” that people he was leaving to go meet were going to kill him, and despite the fact that no autopsy was done.

Frank was found floating in the Gowanus Canal in Red Hook, Brooklyn on June 28. Police reportedly believe he entered the water while still alive in Sunset Park, Brooklyn late in the evening of June 27 or early on the 28th.

Howard Frank’s brother Robert told me a few minutes ago that his brother never would have killed himself by drowning.

Robert Frank also told me that his brother’s housemate, Frank Pohole, hasn’t returned a phone call made several days ago by Robert, who wants Pohole to give him personal family pictures of the Frank’s grandparents and parents and his mother’s ketuba.

Pohole met Howard Frank, who was moderately mentally ill, at a flea market several years ago and soon after invited the newly homeless photo collector to live in his house.

Pohole built a website for the business, current to Web standards from early in the last decade and never finished. It doesn't appear to have been updated in close to a decade.

In the approximately six years Howard Frank lived in Pohole's house – where, Howard Frank told his brother and told friends,  there was no hot or cold running water, electricity (except a limited amount generated by solar power) or heat – Pohole assumed control over much of Frank’s photo leasing business.

And Pohole relied on Frank to pay his back property taxes, a friend of Howard Frank told me today. "Every $500 that came in [from Frank's photo leasing business, Pohole] took half," he said.

Over this time period, Frank was allegedly loaned $80,000 by a friend of Pohole’s to keep the business afloat and to pay the storage fees for the photos.

Just before he died, Frank told friends that he had been forced to bequeath part or all of his more than 1 million photos to that lender (and, in at least one account, to Pohole, as well).

The photos could be worth in excess of $1 million.

No autopsy was done on Howard Frank’s body, allegedly because Misaskim, the haredi organization that deals with funerals and with blocking autopsies, blocked it.

When Frank 's brother asked police today if getting a court order to exhume the body and do an autopsy would help, police did not respond.

A police spokesman who responded to emails last week from FailedMessiah.com with a late night email saying that he would call the following day never did.

An email sent this afternoon to the NYPD for comment on the status of the Howard Frank case has not been returned.

Several people who saw Frank in the last hours of his life told FailedMessiah.com that Frank was not suicidal.

Instead, Frank said he was afraid of an unspecified person or persons who Frank believed were going to kill him.

He was also frantic about the debt he owed to the man who had loaned him money to cover the storage fees for the photos. Frank told a friend only days before his death that the man had just threatened to force Frank to sell the photos, but Frank refused to do so.

"I'm a dead man," Frank told several of people over the last few hours of his life. "They're going to kill me."

Exclusive – The Life And Suspicious Death Of Howard Frank.

Police tell Howard Frank's brother that the investigation into his brother's suspicious death is now being closed, and that Howard Frank's death is being ruled a suicide – even though Frank told people in the hours before he died that he was "a dead man" and that people were going to kill him.