The chief judge of Jerusalem’s state rabbinical court ruled that men can take a pelegish, concubine, in certain specific circumstances. 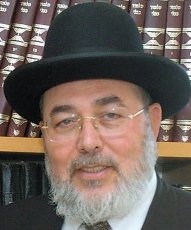 Rabbi Eliyahu Abergel ruled that when a man and his wife have not had children and his wife “refuses to, or cannot, bring children into the world, and refuses to grant her husband a divorce,” he can take a concubine, and that concubine can even live in the same home as the couple.

In Jewish law, a concubine – roughly equivalent to a mistress – is a woman who agrees to have sex with a man. They can have any arrangement between them they choose, but no divorce is required if the couple separate and the woman has no ketuba – meaning she has no financial or other protection if the relationship breaks up.

Concubines fell out of favor and became essentially illegal under Jewish law, halakha, for Ashkenazim more than 1000 years ago. Sefardim mothballed the practice later.

In D’varot Eliyahu, Abergel’s new book, he reportedly writes, "establishing a family is an important commandment. A woman who refuses to, or cannot, bring children into the world, and refuses to grant her husband a divorce, is preventing him from building a family and spreading his seed. In such a situation, the husband is permitted to take a concubine and there is no constraint under halachah [Jewish law]. This ruling will enable husbands to fulfill the commandment of procreation, even if it means taking a regular mistress. The concubine may also live with the couple."

Abergel reportedly also writes that he allowed a leading rosh yeshiva in Jerusalem to take a concubine when it became clear that his wife could not have children.

Abergel, who is Sefardi haredi, is an important halakhic authority who has published dozens of books containing thousands of legal rulings. He was even considered to be a serious candidate for the position of Sephardi chief rabbi of Israel.

The chief judge of Jerusalem’s state rabbinical court ruled that men can take a pelegish, concubine, in certain specific circumstances.