« Hasidic Rebbe Allegedly Caught Cavorting With Much Younger Naked Woman | Main | Netanyahu Is A Dishonest Man Who Deceives Israelis And Sells Out To Haredim, Plesner Says »

Rabbi Yosef Shalom Elyashiv, the leader of Ashkenazi haredim for much of the past decade, has passed away at age 102. 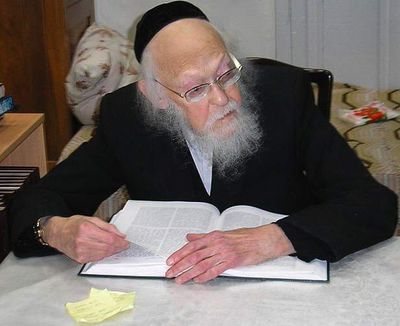 Rabbi Yosef Shalom Elyashiv, the often controversial 102-year-old haredi leader, has died in Sha'arei Tzedek Hospital in Jerusalem, where he had been hospitalized with multiple organ failure for much of the past six months.

Born in Belarus, Rabbi Elyashiv's family made aliyah to Palestine not long before his bar mitzvah.

The couple had 12 children.

But unlike his father-in-law's legendary kindness to and empathy for people, Rabbi Elyashiv was a cold, methodical and self-serving person who believed his Torah study and his (admittedly limted) personal needs were more important than his family's.

He spent 16 to 20 hours a day studing Torah texts, and rarely took time off– even to participate in family celebrations or to help during family emergencies.

When one of Rabbi Elyashiv’s daughters was terminally ill and had only hours to live, Rabbi Elyashiv went to the synagogue adjacent to his Mea Shearim home as usual to study.

When he was told that his daughter had died, Rabbi Elyashiv closed the volume of Talmud he was studying in order to comply with the Jewish law that prohibits mourners from studying Torah or Jewish law, except for highly specialized texts and small sections of Talmud that deal specifically with the laws of death, burial, and mourning, and with the destruction of the Jerusalem Temple.

Underneath his volume of Talmud was a book of Jewish law opened to the section on the laws and rituals of mourning.

Showing no emotion, Rabbi Elyashiv moved the Talmud volume aside and immediately began to study the laws of mourning.

“When we were children, he didn’t know us at all. He didn’t speak to us, whether we were good or bad,” his daughter Batsheva Kanievsky once said. On Shabbat afternoons would he go out for a walk with one of his 12 children, she said. “But don’t think that I mean he would talk to us. He would think of his studies the whole time, but it was still an honor for the child to walk with him.”

After Israel became an independent state, Rabbi Elyashiv was appointed to serve as a senior rabbinic judge in the state rabbinic court system. But he broke with the chief rabbinate in the early 1970s over a decision made by Rabbi Shlomo Goren, the IDF's chief rabbi who had just become Ashkenazi chief rabbi of Israel.

From that point until his final hospitalization several months ago, Rabbi Elyashiv worked to undermine the chief rabbinate and the state rabbinic courts, eventually succeeding in installing an unqualified rabbi with a checkered legal and sexual history as Ashkenazi chief rabbi. Rabbi Elyashiv was also instrumental in engineering the haredi takeover of the state rabbinic courts.

While he was an incisive posek, decisor of Jewish law, Rabbi Elyashiv sometimes allowed haredi politics to influence his rulings.

But even with those rulings, Rabbi Elyashiv allowed (and even encouraged) sick haredim to take organ transplants done with organs harvested from brain dead people.

That ruling and the behavior it fostered helped push many Western countries to ban all Israelis from receiving organs and eventually caused Israel to change its rules on organ transplants to push anyone who refuses to donate organs to the bottom of the transplant waiting list.

His ruling on reporting child sexual abuse to police or other government authorities can be summed up as asserting that the sexual abuse did not have to be witnessed to be reported. It was enough to have a strong indication that sexual abuse took place.

Even though this was very well known, Rabbi Elyashiv never issued a clarification of his ruling to prevent that interpretation from hurting children, even though he issued several major public pronouncements and rulings during this time.

For at least 900 years, Judaism had always considered a convert to be Jewish even if that convert stopped following Jewish law. Rabbi Elyashiv changed that when he backed the 'annulment' of conversions to Judaism if the converts had not remained Orthodox in the years after their conversions. This led to the retroactive unwanted 'annulments' of hundreds (if not thousands) of conversions done by rabbis affiliated with Israel's state conversion court. Based on Rabbi Elyashiv's understanding of Jewish law, an  American convert ot Orthodoxy was ruled to be a non-Jew because she was seen wearing pants – even though halakha allows women to wear pants according to some prominent Orthodox opinions.

Rabbi Elyashiv lived in the Mea Shearim neighborhood of Jerusalem for almost 90 years.

He will be buried in Jerusalem.

Rabbi Yosef Shalom Elyashiv, the leader of Ashkenazi haredim for much of the past decade, has passed away at age 102.