The New York State Republican Party's newly appointed Jewish Liaison resigns after 8 days in office. Gestetner's defense of haredi pedophiles and other haredi criminals, and his habit of calling opponents Nazis, antisemites and bigots, caused the GOP to rethink its appointment of the hasidic PR flack. 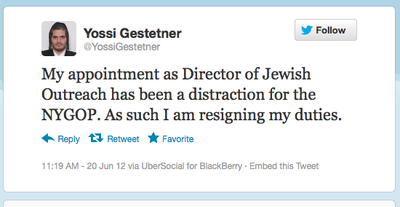 Gestetner's resignation came less than 30 minutes after The Jewish Channel called the head of the New York State Republican Party for comment on some of Gestetner's outbursts and bad behavior ahead of a special it's running tonight on Gestetner's appointment.

A source familiar with the situation said Gestetner's resignation was the result of [The Jewish Channel's] interview, in which, according to the source, Gestetner suggested that he himself was not a Zionist. The source said Gestetner also contended in the interview that the G.O.P. was actually the party of big government, and articulated a defense of some forms of sexual abuse.

Unfortunately, Azi Paybarah, the fool who wrote the CapitalNewYork piece, attempted to kasher Gestetner, first by mistating his job with the GOP:

Yossi Gestetner, a Hasidic operative who worked for the New York State G.O.P. as a liaison to religious Jewish voters…

Gestetner's job title was, in fact, "Director of Jewish Outreach." Note the title says nothing about what type of Jews, Orthodox or not, haredi or not, Gestetner was supposed to reach out to. His job title implies all Jews, and that's how the GOP itself presented it last week.

That makes the GOP look, well, confused about what the Jewish community really is like – which might be why Paybarah shaded the truth.

But Paybarah's covering for Gestetner and the GOP didn't stop there. He also did this (emphasis added):

(Context, which doesn't make the comments any less impolitic or inconvenient from the party's perspective: Many Hasidic Jews are anti-Zionist, and the issue of sex abuse, and how allegations are handled by prosecutors, is a major source of tension and debate in New York's ultra-Orthodox communities right now.)

Yup. A group of religious extremists decides that reporting child sex abuse to police is wrong, and it lets pedophiles walk free. More kids are raped; more kids are abused. And that somehow kashers Gestetner?!?!

Azi Paybarah needs some educating. And I'll bet many victims of child sexual abuse would like that education to start with an immediate and protracted job search and some time on the unemployment line.

Here's some of the Gestetner Jewish Channel interview:

Out Of The Mouths Of Haredi PR Flacks – The Lies And Unethical Behavior Of Yossi Gestetner.

Update 6:23 pm CDT – [Hat Tip: GW.] Gestetner claims Dean Skelos' people were behind the push for him to leave, based on Skelos under the table support for Democrat Simcha Felder over Republican David Storobin in the fall race for the new "super Jewish" Congressional seat.

And then the sleazy PR flack writes:

Another issue which brought distraction to the NYGOP is my ongoing work to defend the Orthodox Jewish Community and the Hasidic way of life against an endless amount of attacks, lies from forces inside and outside the Jewish Community. While others take each alleged misdeed of an Orthodox Jew as a pass to smear the whole Hasidic Community, I have been out there – as an advocate and at times as a contractor – to bring to life the American ideal of “Innocent until proven guilty;” a privilege that some do not want to grant for Orthodox Jews. I have been a voice for balance when issues surrounding the Jewish Community are in the news. The same forces, who misrepresent, spin and lie about many cases and situations surrounding the Orthodox Jewish Community, were out in force to misrepresent to the public the work I have done on behalf a Minority that has few defenders. While this too was a distraction to the State Committee, the Chairman held the line. But I didn’t believe it was fair on my end to force the Committee to deal with this on a daily basis.

Some reports, based on a Jewish Channel that has less online views in a week than what I have on a slow day, suggest I resigned because I didn’t pledge loyally to the Israeli flag in a recent interview. This is nuts because I am more pragmatic on the Israeli issue than Satmar; a community that Skelos and the GOP is more than happy to work with. (In fact, at age 21 my op-ed ran in the Rockland Journal News ripping the Neturei Karta; a public stance that few Israeli-flag-waving Americans have done at age forty). Some claim that my personal stance how to approach the abuse cases in the Orthodox Jewish was an issue with the GOP. This too is crap, since my opinion is similar to the one taken by Agudath Israel; an Orthodox Jewish organization that Mr. Skelos and the GOP work with all the time. Therefore, I do maintain again that Skelos’ boys and my work to push fair and balanced treatment of Orthodox Jews in the public arena, has been a distraction to the State Committee, and as such I stepped aside.

The New York State Republican Party's newly appointed Jewish Liaison resigns after 8 days in office. Gestetner's defense of haredi pedophiles and other haredi criminals, and his habit of calling opponents Nazis, antisemites and bigots, caused the GOP to rethink its appointment of the hasidic PR flack.