When It Comes To Haredi Rabbis And Haredi Heresies, Money, Politics – And Revenge –Talks

And little provides more proof of that then the backstory of the visit ofthe  Ashkenazi Chief of israel Rabbi Yona Metzger to the Fairway supermarket in Paramus, New Jersey. 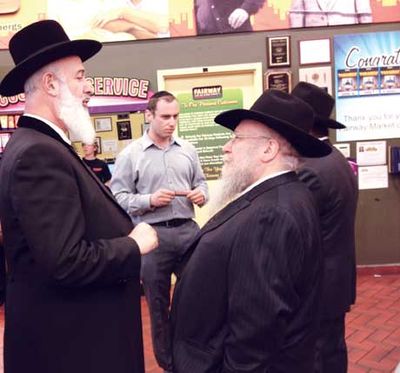 Israel's Ashkenazi Chief Rabbi Yona Metzger recently came to the US for a two-day visit.

His reason for being here?

Speaking at the fundraising dinner of Lubavitch Youth Organization (LYO).

Butman, who claims that his Lubavitch Youth Organization is “the largest Jewish organization in the world,” was at Metzger’s side. Butman is a leader of the camp of Lubavitchers who believe the group’s late leader, Rabbi Menachem Schneerson, to be the messiah. In 1993, Butman arranged a ceremony that sought to coronate Schneerson as the messiah. Schneerson died in 1994, and later Butman published a book arguing that death did not disqualify a claimant to the position of messiah, a stance criticized by mainstream Orthodox Jewish leadership as reeking of Christianity. Butman’s organization is separate from and at odds with the Lubavitch organization that oversees the Chabad emissaries around the world.

I once had video posted here of Metzger chanting the Chabad messianist slogan "Yechi…" at a Chabad rally. If my memory is correct, it was shot as Metzger was running for chief rabbi.

Metzger doesn't speak for free – he's paid (or a nonprofit he's affiliated with is paid, and it in turn pays Metzger in cash or in kind). In this Metzger is not unique. Previous mercenary Israeli chief rabbis like Yisrael Meir Lau had the same arrangement.

Even so, the New Jersey Jewish Standard notes,

…among chief rabbis, Metzger has proven controversial, with various allegations again him from before his tenure leading a former Sefardi chief rabbi to denounce Metzger’s appointment as “a desecration of God’s name.”

NJJS doesn't spell out those allegations.

Metzger allegedly groped both women and men. He also charged a fee for serving as mesader kedushin (wedding officiator) when he was Chief Rabbi of North Tel Aviv. But it wasn't just that Metzger was charging money on top of his state salary – he was allegedly scheduling several weddings at the same time, taking cash from each couple, and extorting those who would not comply. And there were other alleged irregularities.

Honored at the Chabad dinner were Howard Glickberg, the Fairway supermarket chain’s CEO and co-owner, and Richard Whalen, VP and regional director of the United Food and Commercial Workers union (UFCW). The UFCW represents Fairway employees.

The UFCW tried to unionize Agriprocessors Postville plant. When you hear Chabad followers and Rubashkin supporters demonizing "the union," this is the union they're talking about.

Did Whalen know that he was accepting an honor from some of the very same people who had spent the past four years smearing his union?

Fairway was apparently surprised when Metzger – who came with Butman in tow, showed up to bless their Paramus store and affix a mezzuah – did not want to pose for pictures:

[Fairway executives] did not count on the fact that Metzger, whose controversial tenure as Israeli chief rabbi has included charges of improperly accepting free hotel stays, would not be willing to pose for photographs in which he appeared to endorse a private enterprise and perhaps look slightly undignified while doing so.

Metzger was made chief rabbi in a backroom deal. His candidacy was backed by haredi leader Rabbi Yosef Shalom Elyashiv, then a spry man in his early 90s. Elyashiv brokered it.

When Metzger got the job despite the sexual harrasment and other allegations against him, I asked haredi spokesman Rabbi Jonathan Rosenblum how it was that Elyashiv had macked him.

Was it a mistake? Or did Elyashiv, the haredi leader, know about what those very public allegations – allegations that came complete with people ready to testify in court that Metzger had groped then, sexually harasssed them or extorted money from them. (In at least one case, if memory serves me, a person made all three of those claims, saying Metzger groped him and hit on him on while extorting him on his wedding night.)

Rosenblum asked Rabbi Efrati, then Elyashiv's chief assistant and spokesperson. Efrati now big in the kosher supervision business, aided in part by halakhic decisions of Elyashiv that favored him.

There was a delay (I remember it being a few days) which appeared to incorporate Rosenblum gagging on Efrati's answer and then double checking it, perhaps more than once.

Elyashiv knew all about the groping, sexual harassment and financial allegations against Metzger. Elyashiv had backed Metzger anyway.

"To restore the glory to the Chief Rabbinate." Elyashiv said.

Elyashiv, a former senior rabbinic judge in the state rabbinic court system headed by the Chief Rabbis, had been at war with the Chief Rabbinate since he walked off that rabbinic court in the early 1970s. Putting Metzger, a man who lacked the requsite credentials to serve as a rabbinic judge, in the position that supervised those judges and which automatically made him one, was delicious revenge for Elyashiv, who is a cold, mean, nasty little man.

(After Metzger's election, an unprecidented deal was brokered between Shlomo Amar, Metzger's Sefardi counterpart, and Metzger that kept Metzger out of the judicial position, reducing the impact of Elyashiv's revenge somewhat.)

Now toward the end of his term, the Ashkenazi Chief Rabbi of Israel spent a couple days in the New York City metro area with his "old friend," über Chabad messianist Rabbi Shmuel Butman.

And just like bisexual sexual harassment and financial wrongdoing didn't derail the chief rabbi, palling around with a rabbi who advocates the second coming of the hasidic Jesus Christ won't matter, either.

That's because halakha, Jewish law, is malleable. It is often molded and shaped based on politics and money, not principle and precedent. Alleged crimes, sexual impropriety and support for what should be an outright heresy  (and is one according to Elyashiv) – all with proof far exceeding raglayim l'davar, the halakhic standard for presuming guilt – are not great enough sins to interfere with the revenge of Yosef Shalom Elyashiv.

Posted at 07:29 AM in Chabad, Haredim, Israel | Permalink

When It Comes To Haredi Rabbis And Haredi Heresies, Money, Politics – And Revenge –Talks

And little provides more proof of that then the backstory of the visit ofthe  Ashkenazi Chief of israel Rabbi Yona Metzger to the Fairway supermarket in Paramus, New Jersey.