Photo posted by Yossi Gestetner of the alleged rock – note no broken glass is seems to be visible in the picture. The black stripe is supposed to be a seat belt.

The Journal News, basing itself on a police spokesperson and on a community spokesperson, reported that the boy was treated at a local hospital and released.

But that claim appears to be contradicted by a different report by Yossi Gestetner, the hasidic spokesman who is the New York State Republican Party’s new Jewish Liaison. Gestetner claims the boy's skull was fractured and that he was transferred to another hospital with a trauma unit for surgery.

Gestetner called the incident a hate crime in an e-mail sent to the Journal News on Friday.

To be a hate crime, prosecutors must be able to prove that the rock-thrower was targeting the bus based on the race, religion, gender or sexual orientation or the passengers.

At this time, no evidence supporting that claim has been made public by police or by local media.

The bus was carrying 9- and 10-year-old boys from the Satmar hasidic movement’s United Talmudical Academy branch Madison Avenue there.

The 12-year-old boy allegedly threw a rock at the bus, breaking a window, police told the Journal News. The boy’s arrest on a charge of reckless endangerment, a misdemeanor, was announced late Saturday.

Gestetner’s website contains the following account of the incident, and this photo of the rock that allegedly was thrown by the boy lying on the school bus floor.

Oddly, while there are remnants of snacks the boys were eating, I don't see any evidence of broken glass, which leads me to think it is possible the rock in this picture is not the rock thrown at the bus, and that the photo was taken in a different part of the bus or on another bus entirely. But time will tell.

Here is Gestetner's heavily racially charged account of the incident. Note that he presents no evidence of a hate crime, other than the fact that the boy and his friends are black and the victims are Jewish: 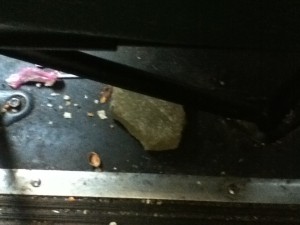 A school bus from UTA filled with 7-9 year old boys in Spring Valley, New York left the School located on Madison Ave (39 South Main Street) at about 12:30 Friday June 15th. One street ahead on Ridge, a group of Black males were gathered and one of them (it turns out it was a 12 year old) threw a big rock which broke a window of the bus and landed onto the head of a seven year old Hasidic boy. The child was rushed into Nyack Hospital; from there he was transferred to the ICU of the Westchester Medical Center where he underwent surgery.

The UTA property was vandalized multiple times in recent months. In the morning of May 23, for example, two drivers noticed that their buses have damage from rocks that were thrown at them. When PD was called, the dispatcher said the two buses should be driven over to the PDHQ if the administration wants a Police Report… This from a Police Department whose jurisdiction is a mere three square miles; and this from a dispatcher whom you think would know that an officer goes to a crime scene; you don’t bring a crime scene to an officer.

Regardless, A Black Female officer from the SVPD arrived to the Friday scene only twenty minutes after the initial call (again despite the fact that their jurisdiction is a mere three square miles). The scene was blocked by buses and EMS vehicles. A car driven by a Black male was caught up in the commotion. Some thought the perp ran into that car. The officer’s concern when arriving was to get the traffic moving again in an area that is not busy by any means. As for the perp, the officer said she cannot do anything about the incident since he is a juvenile.

One of the people on scene asked the officer why she is not trying to learn who the perp is. Another officer who was also on the scene came out of his car saying that no one should tell PD how to do its work. At the same time, the first officer noticed a Hasidic guy recording the event. The officer threatened him with arrest if he does not close his camera; all while a Black Female was – based on people who were there – also recording but was not asked to shut off the camera.

If the lazy and misguided approach from the local PD is not outrages enough, it gets worse: Representatives from UTA went to PDHQ to talk with the Sergeant that this case should not be pushed under the rug. The Sergeant (was informed about this case sometime before 2:00 PM) welcomed in the delegation into his office at 3:10 saying… the officer left her shift by 3:00 so let’s revisit this Sunday 10:30 AM.

Now, what kind of joke is this to let them wait for forty minutes to give the officer time to leave? Plus, SVPD officers are one of the best paid in New York State. They are not volunteers. If the officer ended her shift ten minutes ago, call her back to answer you why she mishandled this!

Almost a year ago, the SVPD totally ignored the calls from Hasidim that a group of Black teens are throwing water balloons and stones on passing cars during the eve hours, causing one person to almost lose control of his vehicle when a water balloon landed on his face through an open car window. Only after tensions stared to flare between both sides due to the lack of a PD response, did Police show up; arresting two Hasidim while totally ignoring the perps who turn out to be the
child and grandchild from someone working for the Mayor in Village Hall.

During the Friday Event, a person from the East Ramapo Central School District got word right after the attack that the 12 year old boy actually went onto a bus to go to his school for some test. The official followed the bus to the school and within hours the school head said the twelve year old admitted to committing this violent act. As far my information goes, the kid was arrested Saturday afternoon.

While a personally think the Spring Valley Police Department does an effective job overall certainly in terms of fighting gun and drug violence in the area, their officers and leadership need to learn – or be forced by the Justice Department’s Civil Rights Division – how to handle these case more objectively.

Here is the Journal News' report:

A 9-year-old boy suffered a head cut and a youth was arrested in Spring Valley when a rock was thrown at a school bus on South Main Street Friday afternoon.

The bus was carrying 9- and 10-year-old boys from the United Talmudical Academy, a Satmar Hasidic Jewish school on Madison Avenue in the village, about 12:30 p.m.

As the bus passed Ridge Street, a 12-year-old boy threw a rock at the bus, shattering a window and cutting the boy, police and a community spokesman said. Late Saturday an arrest was announced for reckless endangerment, a misdemeanor.

The 9-year-old boy was treated at the hospital for a cut to his head, according to Yossi Gestetner, who represents Hasidic Jewish groups and also is a political and social commentator.

Gestetner, in an e-mail on Friday, called the rock throwing a “hate crime.”

For police and prosecutors to charge a hate crime, they have to be able to prove the rock-thrower was at least targeting the bus based on the occupants¹ race, religion, gender or sexual orientation.

Here's the Gestetner photo with my annotations. Note there is another peanut shell next to the rock, and note the unlabeled trash to left of the rock, as well. The size of the rock, if saller than Gestetner's claim,  doesn't lessen the child's culpability for throwing it. But what we don't yet know for sure is if this is the actual rock that struck the Satmar boy. And we also don't know why there is no broken glass in the picture, or why the Journal News account of the incident differs so much from Gestetner's: 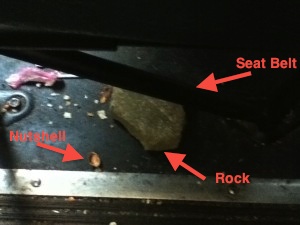 Update 2:31 am CDT – The Monsey Scoop has a brief article and four photos. Note that the group of black males in the Monsey Scoop photo all appear to be little kids, and none of them appear to fear punishment or arrest. The dark bits of material in the shot of the bus floor appear to be gravel. I blew up the photo and none of it really looked like tinted glass. But it could be:

Sources tell MonseyScoop.com that police in Spring Valley are charging someone with hate crime charges, after a rock was thrown at a UTA (Satmar) School Bus, Friday afternoon. The rock struck a 7-year-old child, on his way home from school, when the bus was at Ridge Avenue and Route 59. Hatzolah transported the child to Westchester Trauma Unit, where he underwent Neurosurgery. Information regarding the suspect(s) was not confirmed to MonseyScoop.com, but as can be seen in the attached images, a group of young kids were detained right after the incident.

Stay with MonseyScoop.com as we gather further details about this incident. 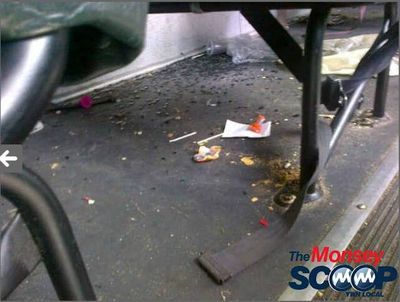 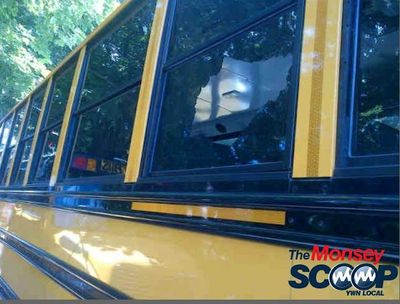 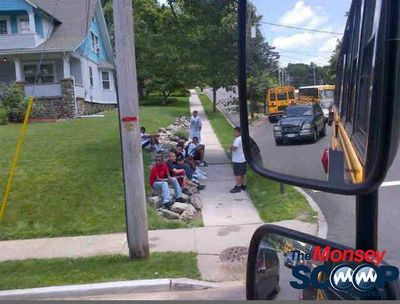 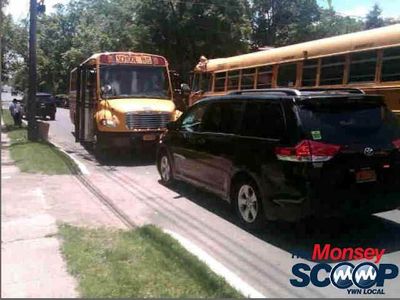 Posted at 02:40 AM in Antisemitism, Crime, Litigation, etc., Haredim | Permalink