Report: Charges In Crown Heights Rape Case To Be Dropped

Charges against two men in the child rape and forced prostitution case of a Crown Heights hasidic girl will be dropped next week, prosecutors told the men’s attorneys today. 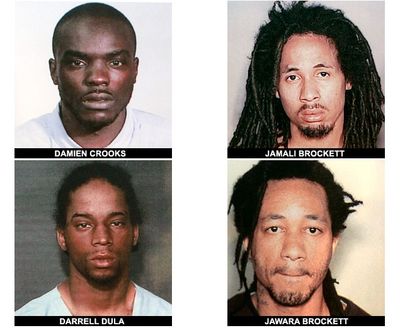 Charges against two men, Darrell Dula and Damien Crooks, indicted in the child rape and forced prostitution case of a Crown Heights hasidic girl, will be dropped next week, prosecutors told the men’s attorneys today, the New York Times reported.

There is no word on the status of the charges against two other men who allegedly raped the girl several times in conjuction with Dula and Crooks.

The victim, who was allegedly raped and prostituted from the time she was 13 until she was 17, had recanted her allegations to police one day after making them last year.

“I once again asked [her] if she was raped,” a NYPD detective wrote in a police report. “She told me ‘no’ and stated to me, ‘Can’t a ho change her ways?’”

Police and prosecutors withheld that statement from the defense.

Dula and Crooks languished in Riker’s Island prison for more than a year awaiting trial before news of the girl's recantation broke and the men were freed.

The victim’s father told the Times he was he was extremely disappointed with the district attorney’s office.

“They basically wrote this case off in a manner that sends a really bad signal to other victims,” he said.

On June 5, Dula’s lawyer James Phillips filed a motion to dismiss the charges against his client. The motion was almost exclusively based on the withheld evidence.

To answer that motion, the district attorney would have had to admit his own office’s misconduct – something a dismissal avoids.

After Hersh resigned, more new information continued to surface, including recordings the girl secretly made of telephone calls she made after the men were indicted. On the recordings she discusses the case in what the Times calls “an apparent attempt to bolster the account she had presented to the grand jury.”

But she also showed misgivings.

“I care for him and I have feelings for him and I feel closer to him than anybody out there,” she said about one of the indicted men. “I wish I could just like, I don’t know, just say forget it, just work it out with Crooks.”

Victims of long term sexual abuse and related crimes often come to identify with their abusers. Pimps in part rely on this psychological reaction to control the women they prostitute.

The Crown Heights victim, now 22, was recently photographed in Israel shooting an automatic weapon on an outdoor target range, something that worried defense attorneys for the two men.

Word of dismissal of the charges against the men coincided with the arrest of four hasidic men in Williamsburg. The men allegedly tried to bribe a child rape victim with $500,000 in an attempt to get her to drop charges against her alleged rapist, Rabbi Nechemya Weberman, and unlicensed therapist in the hasidic community. The men also allegedly extorted the girl’s boyfriend by threatening to destroy his kosher restaurant business if he didn’t convince the girl – who is now 17 – to take the money and leave town. The rapes allegedly began when she was 12.

Rabbi Joel Kolko’s trial for allegedly harassing a one of the boys he sexually abused is also underway. Prosecutors allegedly mistreated the boy’s family at the time of the original sex abuse trial, tricking them into allowing a plea deal that let Kolko walk free.

The bribery and extortion attempt in the Williamsburg case took place months ago, raising the question of why the 4:00 am arrests were made today, with a lone friendly reporter tagging along with the D.A.’s arresting officers.

Report: Charges In Crown Heights Rape Case To Be Dropped

Charges against two men in the child rape and forced prostitution case of a Crown Heights hasidic girl will be dropped next week, prosecutors told the men’s attorneys today.