The names have been released of the four hasidim charged with attempting to coerce a victim of child sexual abuse and rape to drop charges against a prominent hasidic rabbi. 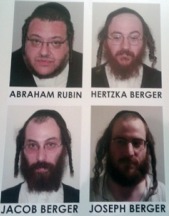 “I’m hoping that this will be a message to those who are intimidated that they should come forward and help us,” Brooklyn’s District Attorney Charles Hynes said at a news conference held to announce the arrests of four hasidic men accused of tampering with a child sex abuse witness and coercion. “No one can engage in this kind of conduct and feel free that, based on prior experience, nothing can happen to them.”

Abraham Rubin, 48, of Williamsburg was charged with bribery, witness tampering and coercion. He was recorded offering the alleged victim’s boyfriend $500,000 that would be paid to the victim if she dropped the charges against Rabbi Nechemya Weberman, an unlicensed hasidic therapist who allegedly raped her over a several year period beginning when she was 12 years old. Rubin allegedly urged the young couple to flee to Israel to avoid testifying and also allegedly promised to provide them with an attorney.

Also charged were three brothers – Jacob, Joseph and Hertzka Berger. The three are the sons of the rabbi who provided kosher supervision for the boyfriend’s Williamsburg restaurant, as was first reported by FailedMessiah.com.

The brothers were charged with coercion for threatening to remove boyfriend’s restaurant’s the kosher certification and then removing it when he refused to cooperate with the brothers’ demands to convince his girlfriend to drop the charges against Weberman.

All four men pleaded not guilty yesterday as a large crowd of their black-clad hasidic supporters watched, the New York Times reported.

The timing of the 4:15 am arrests raised questions among anti-child-sex-abuse activists because the crimes allegedly committed by the four men took place weeks prior, causing some to think that Hynes had timed the arrests to coincide with dropping charges in a Crown Heights child rape case that is particularly embarrassing to Hynes, and to coincide with the trial of Rabbi Yehuda Kolko. Kolko is charged with allegedly harassing one of his child sexual abuse victims – a case Hynes was allegedly not quick to prosecute.

An A.D.A., Josh Hanshaft, told reporters that the four hasidic men had been “telling witnesses to forget what they know, not to come to court, to disappear.” The D.A. has “clear, substantial evidence” of the bribe, as well.

Hertzka Berger’s lawyer, Bruce Wenger, told reporters that the four men all deny the allegations against them and “are all obviously going to be fighting these cases vehemently. They are looking forward to their day in court.”

If convicted, Rubin faces up to seven years in prison for the attempted bribe and coercion. Joseph and Hertzka Berger each face a year in jail, and Jacob Berger faces up to four years for coercion surrounding the restaurant’s kosher supervision, the Times reported.

Weberman’s attorney, George Farkas, told the New York Times that Weberman knew nothing about the alleged bribe and coercion.

On May 16, more than 1,000 hasidic men crowded into a Williamsburg wedding hall to raise money for what organizers said was Weberman’s legal defense. Posters on streetlights, lamp posts and walls across Williamsburg that were also posted in synagogues there, accused the alleged victim of libeling Weberman and the hasidic community. (The term in colloquial Yiddish usage has the connotation of a blood libel.) Another poster advertising the fundraiser depicted the alleged victim as a missile about to strike and destroy the hasidic community.

Yossi Gestetner, a public relations consultant for the hasidic community who served as the spokesman for the event, told reporters then that hasidim were just standing up for the American principle of innocent until proven guilty.

Gestetner resigned Wednesday after serving for only eight days as the New York State Republican Party’s Jewish liaison after his work as a spokesperson for the Neturei-Karta-linked group Jews Against Zionism and his defense of accused and convicted haredi criminals, including Rabbi Nechemya Weberman, was publicized by The Jewish Channel.

The names have been released of the four hasidim charged with attempting to coerce a victim of child sexual abuse and rape to drop charges against a prominent hasidic rabbi.