A woman allegedly deemed by haredim to be immodestly dressed was attacked by haredim in Beit Shemesh today. They hurled stones at her car, shattering one of its windows. 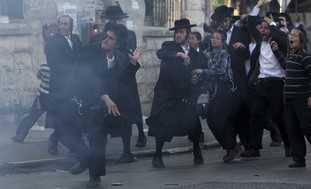 A woman allegedly deemed by haredim to be immodestly dressed was attacked by haredim in Beit Shemesh today. They hurled stones at her car, shattering one of its windows, Ynet reports.

The woman was reportedly unharmed in the attack and police have reportedly launched an investigation.

Predictably for police in Beit Shemesh, no suspects have been identified.

Police there largely ignored months of spitting and screaming attacks against little pre-teen Orthodox girls last year by grown haredi men who harassed them for dressing “immodestly.” The haredi men spit on them, chased then down the street screaming “whore” and “shiksa,” and massed in front of their school on a daily basis.

There was also at least one stoning attack by haredim against a small Orthodox boy carried out during that time.

Police suggested parents guard their children and claimed the attacks on the little girls really was not a police issue. The city's haredi mayor urged the Orthodox school to relocate away from the edge of a haredi neighborhood. Otherwise, he claimed, the little Orthodox children would continue to be in danger, and there was nothing the mayor could do, he claimed, to protect them.

Haredim reportedly wanted (and still want) to take over that school building and use it for their own purposes, and the attacks on the little children were in part meant to facilitate that.

The Orthodox parents refused to give in to haredi violence, which continued unabted until the terror of one of those little Orthodox girls, who shook and cried whenever she got near her school, was broadcast on an Israeli TV news magazine. Her fear – and police inaction and Beit Shemesh's political corruption – became the country's cause celebre, and a massive grassroots protest against haredi violence drew thousands of Israelis from across the country to Beit Shemesh.

It was only then that that Beit Shemesh police made a significant attempt to protect children from the haredim.

Even so, one of the haredi men allegedly responsible for the attacks on the children told an Israeli TV news reporter on camera that there was nothing wrong with harassing and attacking the little girls and women. He and his friends were just standing up for the Torah, the man claimed.

Six months ago, not long after that interview, a woman working for Israel’s national lottery was attacked by a stone throwing mob of haredim upset that she was wearing pants and other “immodest” clothing.

"They shattered all the [car] windows and threw stones at me. I begged them to stop, I promised to leave, but they wouldn't let me go," she told reporters after the attack.

Haredim in Beit Shemesh also staged mini riots over the removal of signs posted on public and private property ordering women there to walk on the opposite sidewalk from men.

And then in early June, a local supermarket in a non-haredi area of the city was exposed in the media after it ordered its customers to wear modest clothes. Those who did not were told to put on large black shawls provided provided by the store if they insisted on entering.

The supermarket admitted it ordered the restrictive dress code to placate haredim. It removed the signs ordering the modest dress after receiving a large amount of negative press but left the large black shawls by the door, anyway – a seeming offering, of sorts, to the screaming, stone-throwing men in black who to this day see nothing wrong with what they do.

A woman allegedly deemed by haredim to be immodestly dressed was attacked by haredim in Beit Shemesh today. They hurled stones at her car, shattering one of its windows.