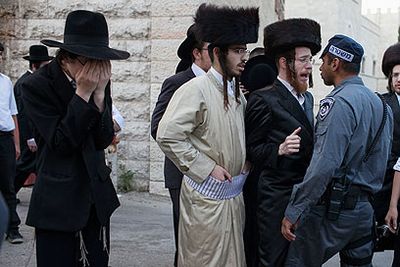 A calmer moment in yesterday's protest

The demonstration took place on the edge of the capital’s Mea Shearim neighborhood. Protesters attempted to block Nevi’im Street and called police  “Nazis.”

A similar demonstration took place last week and in weeks before that at or near the same location.

This week’s protest focused on the issue of the Karta parking lot, which is located near the Old City's Jaffa Gate and is open on Shabbat.

Haredim stoned passing cars and spat on them.

They also yelled at secular women they thought immodestly dressed.

"That is not how a Jewish woman dresses!” they yelled at one woman.” Another was called a “shiksa,” a derogatory term for a non-Jewish woman. One of the haredim threw a soda can at a secular woman, as well, Ynet reported.

Posted at 04:13 AM in Crime, Litigation, etc., Haredim, Israel | Permalink