« Game On! | Main | Taking Aharon Friedman's Get Refusal To The Streets » 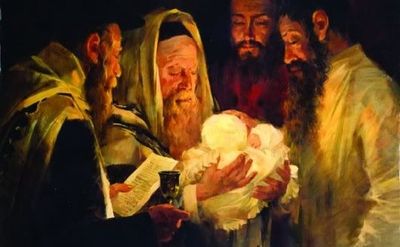 June 6, 2012 – New York City Health Commissioner Dr. Thomas Farley today issued a statement strongly urging that direct oral-genital suction not be performed during Jewish ritual circumcision, and announced that several hospitals, including those serving Hasidic Jewish communities and all Health and Hospital Corporation hospitals, have agreed to distribute a brochure that describes the risk of contracting the herpes virus from this practice, known as metzitzah b’peh. Health Department investigations of newborns with herpes virus between 2000 –2011 have shown that 11 infants contracted the herpes virus when mohelim, or ritual circumcisers, placed their mouths directly on the child’s circumcision wound to draw blood away from the circumcision cut. Ten of these infants were hospitalized, at least two developed brain damage, and two babies died.

“There is no safe way to perform oral suction on any open wound in a newborn,” Commissioner Farley said. “Parents considering ritual Jewish circumcision need to know that circumcision should only be performed under sterile conditions, like any other procedures that create open cuts, whether by mohelim or medical professionals.”

For example, in November 2004, a Health Department investigation found that twins contracted herpes virus following a ritual circumcision which included direct oral-genital suction (metzitzah b’peh) even though the mother had no history of oral or genital herpes, nor was there any recent history of herpes among hospital staff who cared for the infants. At 16 days, the twins were evaluated for fever and lesions on their abdomens, buttocks and perineums, including their genitals. One of the twins died.

The Health Department brochure “Before the Bris” describes the risk to infants of contracting herpes through direct oral-genital suction and advises parents considering ritual Jewish circumcision to ask the mohel several days before the bris if he practices direct oral-genital suction (metzitzah b’peh). This will give parents time to talk to a health care provider and consider other options for circumcision.

The following hospitals have agreed to distribute “Before the Bris” to parents considering out-of-hospital circumcision of their newborn boys:

Some religious authorities approve of alternatives to direct oral-genital suctioning that avoid direct contact between the  mohel’s mouth and the open wound of a baby’s circumcised penis, such as suctioning blood from the circumcision wound with a sterile glass tube, or using a sponge or sterile gauze pad to wipe the blood away. There is no evidence that these methods can spread herpes infection to newborns.