A notoriously dirty haredi city puts its clean up hopes on its young. 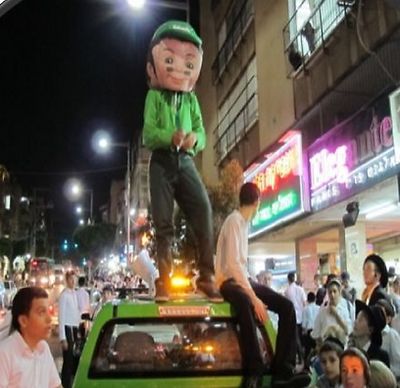 Benny, professionally designed to appeal to all of the various haredi factions, from hasidim and mitnagdim to various Shas-affiliated Sefardi groups, teaches haredi kids about green living.

Like other concentrated populations of haredim which generally have less awareness of environmental issues than the general non-haredi population, Bnei Brak is notorious for overcrowding, litter, and paskvillim, wall posters, posted on every available public surface from street lights, building sides and fronts, and even recycling bins.

To try to reduce visual pollution, the city has just decided to make posting notices on the sides of recycling bins legal in the hope that will reduce the number of posters plastered elsewhere by adults.

But true change probably lies with the young, which is why Benny was created.

A notoriously dirty haredi city puts its clean up hopes on its young.