Fight Over Agriprocessors Unpaid Taxes Shows Successor To Be Deceptive 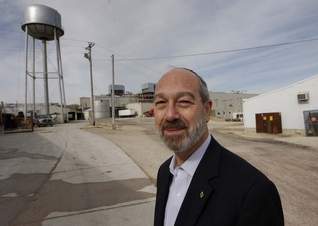 POSTVILLE, Iowa — Four years after an immigration raid on a kosher slaughterhouse put a national spotlight on the town of Postville, about 140 miles northwest of the Quad-Cities, the relationship between the city, its biggest employer and the county hardly could be worse.

In 2010, officials in Allamakee County filed a half-million-dollar lawsuit against Agri Star Meat & Poultry for taxes incurred when the processor was known as Agriprocessors and under different ownership.

Two years of courtroom wrangling later, the county has racked up a legal bill of nearly $140,000 to pursue its claim, but — despite a ruling in the county’s favor — a final resolution still seems far off.

Then in March of this year, county officials refused to sign off on an incentive package for Agri Star, essentially stopping the company from obtaining close to $1 million in tax abatements through the Iowa Economic Development Authority.

“It’s outrageous,” said Doug Gross, the 2002 Republican nominee for governor and an attorney with the Des Moines law firm BrownWinick that represents Agri Star’s owner. “These are two totally unrelated issues, and the county is holding the incentives hostage for some type of leverage in the tax litigation.”

But the ferocity with which Agri Star has fought the tax claim, despite a ruling by a federal judge that the county is owed the money, has left a bad taste in the mouths of some Postville residents.

“I’d like to help them. I think we could get a brownfield designation for the old turkey processing plant near them, and that would help them expand or fix up that entrance,” said Postville Mayor Leigh Rekow. “But we can’t do anything until this lawsuit is resolved.”

Agri Star came to be when Montreal businessman Hershey Friedman formed a limited liability corporation called SHF Industries and bought the assets of the bankrupt Agriprocessors plant in June 2009.

The sale came 13 months after a massive U.S. Immigration and Customs Enforcement raid on the plant, which ended in 389 arrests of workers on immigration violations.

Immediately after the raid in May 2008, replacement workers with little training were brought in to replace the undocumented workers who were detained and eventually deported. At the same time, the housing bubble had burst, and property values were plummeting in Postville.

Enter Friedman who bought the plant and promised to pay better wages, install an E-Verify system for background checks and run everything above board.

Friedman bought the assets “free and clear” of liability in 2009, according to court filings. He still operates the business as a kosher slaughterhouse, which means the animals must be killed and prepared in a specific way in accordance with the laws of the Torah.

Rekow said the replacement workers soon were replaced by permanent employees much to the relief of locals who became concerned with the rowdy happenings downtown when the shifts got out. Even though Friedman didn’t plan to live in town like the former owners, Rekow said, things seemed to be moving in the right direction.

Then, the county sued in 2010 saying that the company owed taxes for the 2007-2008 tax year when they went unpaid by Agri Star [sic – should read: “Agriprocessors”]. SHF pointed to the “free and clear” ruling, but in January of this year, the same judge that gave that ruling said that although Agri Star was aware of the tax liability, it chose not to make the court aware of it. Therefore, the company was “not a good faith purchaser” and the county still was owed the money.

But the court also said there was a question if it could rightly make SHF pay the back taxes or if the county needed to collect from some other entity, such as the banks that had sold the Agriprocessors assets.

In response to a request for an interview, Friedman issued a statement through the Des Moines public relations firm WPNT: “Our intent with Agri Star Meat and Poultry LLC is to create a high-quality product and a high-quality workplace. We are committed to the employees of Agri Star, the city of Postville and our customers across the country. We strive to create a safe, productive workplace where our employees are provided with competitive wages and benefits. We produce high-quality products for our kosher consumers. Two key components of our business strategy are integrity and trustworthiness. We will strive every day to uphold these values.”

Today, Postville looks much like it likely did before the 2008 raid. The town of 2,227 sits at the crossroads of highways 51, 52 and 18 in a hilly part of northeast Iowa.

Hispanics, many of whom work at Agri Star, make up about a third of the population, and that influence is seen in the restaurants and Supermercado downtown.

Orthodox Jews, who also work at the plant, influence the downtown landscape as well. There are two Jewish markets and Jews dressed in black suits and white shirts walk along the four or five streets that could be considered the downtown area.

City Clerk Darcy Radloff said the town “is still coming back” from the raid and the effects of the economic recession, and she credits Agri Star with some of that.

Aaron Anderson, 33, has lived in Postville most of his life and witnessed the raid and its aftermath. He knows people who work at the plant and thinks the town might be better off without it.

“It wouldn’t bother me at all if they left; I think they should,” he said.

Agri Star’s workforce fluctuates with the season, but the best estimate is the company typically employs between 600 and 700 people on any given day. That’s a tremendous amount of local economic impact.

It makes the acrimonious lawsuit between the company and local officials all the more sensitive.

In March, Allamakee County Treasurer Lori Hesse joined state Rep. Bob Hager and county Supervisor Lennie Burke on a trip to Des Moines to tell the Iowa Economic Development Authority Board that they would not sign off on a local match for the tax abatements.

Hesse wouldn’t speak about the lawsuit on the advice of the county’s attorney, Wesley Huisinga of Cedar Rapids, but the county’s position is laid out in a March 23 letter from Huisinga to Economic Development Director Debi Durham, which was obtained through an open records request.

“Given the substantial tax obligations owed and SHF’s continued efforts to escape liability therefore, neither Allamakee County nor the city of Postville are in a position to support in any way, SHF’s request for tax abatement or other local financial contributions,” Huisinga wrote.

In a phone call, Huisinga said both sides have asked the court for clarification on how to proceed, but nothing has been forthcoming. The county also is seeking attorney fees and other costs associated with the litigation, which pushes the price tag to more than an estimated $850,000.

Gross, who represents SHF, said the county and the city have been obstinate.

Tina Hoffman, spokeswoman for the IEDA, said that IEDA rules don’t allow the state to offer the incentives in question without a local contribution, so the incentive offer to Agri Star has been put on “indefinite hold” until the lawsuit is resolved.

Fight Over Agriprocessors Unpaid Taxes Shows Successor To Be Deceptive