An Israel mob attacks and beats an Ethiopian Jew mistaken for a non-Jewish African refugee. 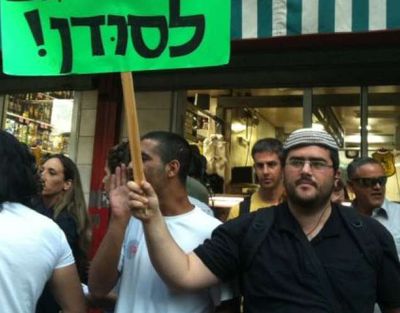 Hananya Vanda, an Ethiopian Jew, was photographing an an anti-African refugees demonstration in south Tel Aviv tonight when a mob of demonstrators stopped shouting “leftists are traitors,” dropped their signs saying “south Tel Aviv, not South Sudan,” and attacked him and beat Vanda, stopping only when they realized that Vanda was an Ethiopian Jew, not a Sudanese or Eritrean refugee, Ha'aretz reported.

After the attack, Vanda told reporters that he was walking by the demonstration taking  photographs when the mob attacked him. In Israel, Vanda said, “Sudanese are treated just like Ethiopians [Jews], the black presence is intimidating [to Israelis].”

Tonight’s demonstration was organized by extreme right wing activist and former follower of the late Rabbi Meir Kahane, Baruch Marzel, who told reporters the mob hopes to hold these demonstrations every day “until the Prime Minister and the Foreign and Interior Ministers will start to act [to deport the African refugees], rather than [just] talk.”

Last week, an anti-African-refugee demonstration in south Tel Aviv attended by more than 1000 people turned violent after right wing Knesset members and other politicians called for the deportation of the African refugees. Some politicians called the refugees names. Likud MK Miri Regev called them a “cancer.”

Demonstrators rioted, smashed, looted, and beat at least one African refugee as they set fire to trash dumpsters and blocked roads.

In April, several apartments and a day care linked to African refugees were firebombed in what police believe was a coordinated attack. No arrests have been made.

Meanwhile, earlier today Attorney General Yehuda Weinstein told a Jerusalem court that there is no longer any reason to refrain from deporting South Sudanese. The situation in South Sudan is no longer bad enough to cause us to fear for the lives and physical safety of “migrants” who are returned there, Weinstein said, basing himself on a new report issued by Israel’s Foreign Ministry.

An Israel mob attacks and beats an Ethiopian Jew mistaken for a non-Jewish African refugee.