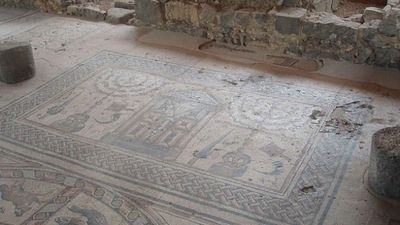 The mosaic floor as it was before the vandalism

Experts suspect extremist Jews who object, sometimes violently, to excavations they claim involve ancient grave sites. There was no claim of responsibility. Police are investigating.

Guards found the damage on Tuesday morning, said archeologists involved in the site.

The mosaic, dating 400 years after the birth of Jesus, was one of the best preserved and beautiful of its period, according to archaeologists.

It featured illustrated zodiac signs and the traditional symbolism of a fourth-century synagogue: ritual candelabras and palm fronds. The synagogue's ruins, including its ancient mosaic floor, were in a fenced-off area of a national park in Tiberias, next to the Sea of Galilee.

It listed the names of the synagogue's chief patrons in ancient Hebrew, Latin and Greek.

Photographs issued by the Antiquities Authority showed parts of the mosaic floor reduced to gray chunks of rubble. Other photographs showed blue spray paint scrawled over the mosaic, covering ancient Hebrew and Greek letters spelled out in blue, red and beige tiles. Graffiti was also scrawled along rock walls beside the mosaic. Perpetrators also punched a hole in the mosaic between two candelabras.

"On every grave, a site," one neatly written Hebrew slogan said.

Dahari and other archaeologists said it referred to constant accusations by a tiny Jewish hard-line group that the Antiquities Authority was digging up Jewish graves. Disturbing Jewish graves is a deeply offensive act for devout Jews.

Archeologists said they have found similar graffiti on other sites. The Hebrew word for "site" is also shorthand for an archaeological site, as in English.

An archaeologist who frequently works in the Galilee area, Gilad Kinamon, said ultra-Orthodox Jews frequently turned up to his sites to demonstrate against his work.

"It was the best of Jewish art of its time, of the late Roman and early Byzantine period," said Dahari. They ... destroyed what was in front of them without thinking," he said.