An Atlantic City property linked to the Lichtenstein family, owners of the abandoned Philadelphia factory that burned down in April, killing two firefighters, is causing problems for neighbors and government officials. The Lichtenstein family, who are Gerrer hasidim, also founded and publish the haredi daily Hamodia. 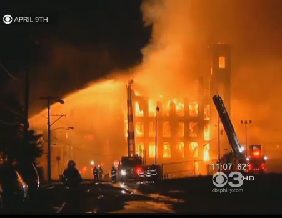 An Atlantic City property linked to Yechiel Lichtenstein, an owner of the abandoned Kensington factory that burned down in April, killing two firefighters, is causing problems for neighbors and government officials in the Shore resort.

The seawall on the property at Barrett and Massachusetts Avenues along Snug Harbor is crumbling, flooding the street and causing it to buckle.

“This has been a major headache for us,” said Bob Chapman, who lives in the neighborhood.

Atlantic City officials said they were owed about $104,000 in back taxes on the property.

The situation has strong parallels in Philadelphia, where Lichtenstein and his father, Nahman, who both live in Brooklyn, N.Y., owe the city about $385,000 in unpaid taxes on multiple properties, although they have negotiated a payment plan with the city. According to the Philadelphia Department of Licenses and Inspections, the Lichtensteins failed to secure one of those parcels, the former Thomas Buck Hosiery factory in Kensington. On April 9, the building burned and a wall collapsed, killing Lt. Robert Neary and Firefighter Daniel Sweeney.

A grand jury is investigating the fire.

Michael Schwartz, a lawyer for Pepper Hamilton whom the Lichtensteins hired after the fire, declined to comment. Dan Fee, a spokesman for the Lichtensteins, said, “The property has been the subject of a long-running court case. The parties have settled and control of the property has been transferred to Republic First Bank. All other questions about their property should be referred to the bank.”

On Thursday evening, about two hours before high tide, with water starting to seep onto the street from the bulkheads along the 800 block of Massachusetts Avenue, Atlantic City Mayor Lorenzo Langford, Councilman Martin Small, and other officials arrived at the Bungalow Park property to address neighbors’ concerns.

Residents had lined the street with “Slow No Wake” buoys, and several wore waders and carried a life raft to illustrate their fears of worsening flooding and structural instability with the street. They showed photos of water up to their garage doors. About three dozen neighbors gathered in the street with the city officials to voice their concerns, which they said dated back 13 years.

Langford, calling the absent property owners “derelict,” vowed to address the issues with the street immediately through legal and engineering methods, and possibly by involving his emergency management director. He tried to deflect the criticism of neighbors, who said they had been trying to have the matters addressed for at least a decade.

“No matter who owns it, we’re going to get to the bottom of it,” said Small, whose district no longer includes the neighborhood of Bungalow Park but who represented it for many years.

Atlantic City Solicitor Braun Littlefield said the city was not aware the Lichtensteins were connected to the property.

An Atlantic City property linked to the Lichtenstein family, owners of the abandoned Philadelphia factory that burned down in April, killing two firefighters, is causing problems for neighbors and government officials. The Lichtenstein family, who are Gerrer hasidim, also founded and publish the haredi daily Hamodia.