In at least one case Brooklyn's District Attorney Charles Hynes allowed a beit din (haredi rabbinical court) lead by Rabbi Dovid Feinstein to decide the outcome of a grand jury investigation. Following the beit din ruling in March of 2000, the D.A. dropped charges against Rabbi Shlomo Hafner of molesting a 10-year-old hearing-impaired boy, with one of the rabbis bragging that "We educated the D.A. on how to properly conduct a sex abuse trial." 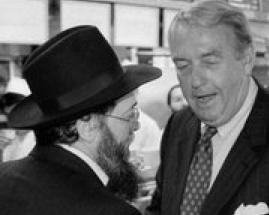 The special treatment given by prosecutors to Orthodox Jewish sex offenders, reported on extensively over the past six years in The Jewish Week and on the blog Failed Messiah, was first documented in a Newsday series in 2003 regarding the failed police investigation in Brooklyn of infamous alleged serial child molester Avraham Mondrowitz, revealing how he was allowed to flee to Israel and avoid extradition due to political pressure from his community. A retired Police Detective expressed the frustration of the "handcuffed" police department who had repeatedly discovered that there were "two justice systems in Brooklyn; one for Orthodox Jews and the other for everyone else."

While Brooklyn District Attorney Charles Hynes boasts that he stemmed the tide of child molestation in Brooklyn's Catholic community by insisting that the Bishops sign a "memo of agreement" to turn over all allegations directly to his office, this is a far cry from his agreement with the Agudah rabbis allowing them to decide which alleged molesters are reported to the police, as was exposed by Failed Messiah and repeated last week in a New York Times article. Regardless of Mr. Hynes' claims that he "expects" that these allegations will "also be reported to his office," he has never criticized the rabbis for not reporting them despite the fact that there exists not a single documented case in which a leading rabbi in Brooklyn has reported a molester to the police.

An account detailed in "Tempest and the Temple: Jewish Communities and Child Sex Scandals" (Brandeis University Press, 2009), citing research published in 2008 in the Journal of Child Sexual Abuse, documents that in at least one case Mr. Hynes allowed a Beit Din (rabbinical court) lead by Rabbi Dovid Feinstein to decide the outcome of a grand jury investigation. Following the Beit Din ruling in March of 2000, the D.A. dropped charges against Rabbi Shlomo Hafner of molesting a 10-year-old hearing-impaired boy, with one of the rabbis bragging that "We educated the D.A. on how to properly conduct a sex abuse trial."

Prosecutorial tolerance in Brooklyn and other Orthodox enclaves (such as Lakewood, N.J., Monsey, N.Y., and Baltimore, Md.) for rabbis protecting child molesters is all the more disturbing at a time when the national and global trend is increasingly to crack down on cover ups. In Missouri, a Catholic Bishop was indicted for failing to report an abusive priest, and four Amish Bishops were convicted of failing in their duty as mandated reporters to inform the authorities of a child molester in their church. Officers of the University of Pennsylvania were arrested for failing to report allegations against football coach Jerry Sandusky, and the Archbishop of Philadelphia is being tried for endangering the welfare of children after allowing accused priests to work with children without alerting police or unsuspecting parents. In Los Angeles, the Archbishop has been investigated by the FBI for fraudulently passing off a pedophile priest as safe to be teaching children. Even the Hague is taking up the question of whether the institutional cover up of sexual abuse perpetrated by a religious hierarchy on its children, should be considered a crime against humanity.

But in the name of "cultural sensitivity" the State's Attorney's office in New Jersey tolerates a "wall of silence" by rabbis in Lakewood, who proudly announced in the Asbury Park Press in 2009 that all cases of sexual abuse against children are "handled" by a special Beit Din that was set up by the local yeshivah. Last year a Jewish Week investigation exposed that State's Attorney Marlene Lynch Ford has made no efforts to force the rabbis to turn over cases of child abuse that they have "adjudicated," despite the fact that it is a crime in New Jersey for any adult to fail to report suspicions of abuse to the authorities. In Baltimore, there has been extensive coverage in The Jewish Times documenting the Va'ad Harrabanim (the Council of Rabbis) putting pressure on victims of abuse and their advocates to keep silent, and yet law enforcement agencies refuse to even investigate as long as victims are still too intimidated to come forward.

In many cases of child molestation in the Catholic Church, including in Long Island, N.Y., Boston and Philadelphia, prosecutors have convened grand juries to subpoena all the records of abuse allegations, and in one example in Belgium last year, police raided church offices to investigate hidden records. In cases of rabbinic cover ups, however, prosecutors have not even gone as far as asking nicely and respectfully for the rabbis to give them all of the names of the alleged molesters they know about, and have certainly not put any pressure at all on the rabbis for breaking the law and endangering the welfare of children.

What is the reason for this double standard? Is it some kind of reverse discrimination, in which the authorities bend over backwards to avoid charges of anti-Semitism?

But is it really anti-Semitic to protect Jewish children, even if those who are harming them happen to be Jews from their own community, and sometimes even rabbis? Ultimately, Jewish children will only be safe when Jewish and non-Jewish people of good conscience work together to demand that the rabbis stop covering up abuse, and that the prosecutors use all their resources and authority to bring the abusers to justice and to hold those who cover up abuse accountable.

In at least one case Brooklyn's District Attorney Charles Hynes allowed a beit din (haredi rabbinical court) lead by Rabbi Dovid Feinstein to decide the outcome of a grand jury investigation. Following the beit din ruling in March of 2000, the D.A. dropped charges against Rabbi Shlomo Hafner of molesting a 10-year-old hearing-impaired boy, with one of the rabbis bragging that "We educated the D.A. on how to properly conduct a sex abuse trial."