A haredi Jerusalem religious court judge is under investigation by the State Prosecutor's Office after he was found to have ruled on divorce cases in which his daughter or son-in-law represented the husband or wife. 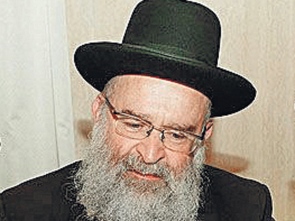 A Jerusalem religious court judge is under investigation by the State Prosecutor's Office after he was found to have ruled on divorce cases in which his daughter or son-in-law represented the husband or wife.

The judge, Rabbi Chaim Yehuda Rabinovitch, was found by the judicial ombudsman, retired Supreme Court Justice Eliezer Goldberg, to have decided divorce cases in which his daughter, Gila Naftalin, or her husband, Shaul Naftalin, represented one of the contesting spouses, which Goldberg deemed a violation of judicial procedure and ethics. There had been complaints that Rabinovitch ruled on dozens of such cases; Goldberg found that he transferred some of them to other judges.

In one divorce case Rabinovitch adjudicated, Goldberg found that his daughter represented the wife and prepared the separation agreement, while the court record listed the judge's son-in-law as the woman's lawyer.

Goldberg also found that the court record inaccurately stated that the husband and wife accepted the terms of the separation agreement, adding that the case record was only filed after an initial review found it missing.

Gila and Shaul Naftalin issued a statement saying they never appeared before Rabinovitch in any substantive legal proceeding, and that when Shaul Naftalin was to appear in a case before a panel of judges including Rabinovitch, the case was transferred to another panel. Goldberg, they claimed, confirmed that in his findings. They said the only exceptions were in entirely routine cases or technical matters, and that religious court authorities found nothing improper about it. After Goldberg deemed otherwise, Rabinovitch stopped ruling on any matter whatsoever when his daughter or son-in-law were involved, said the Natfalins' statement.

Batsheva Sherman-Shani, the director of Yad La'isha, a legal advocacy group that supports women whose husbands deny them a religious divorce decree, expressed doubts that things would improve. She said Dichovsky and Chief Sephardi Rabbi Shlomo Amar, who is also president of the Rabbinical High Court, are afraid to confront religious court judges.

"In the rabbinical courts," Sherman-Shani said, "there is no authority, no hierarchy. Those with the right connections in the rabbinical world get promoted. The strongest reflection of that is that some of the religious judges even ignore the rulings of the Rabbinical High Court and rule as they wish." Last year the rabbinical court system's 94 judges were hit with 70 complaints to Goldberg over alleged misconduct; the ombudsman found 14 complaints justified. Most involved what Goldberg deemed violations of the principles of fairness, or "natural justice."

In recent years, Goldberg and his predecessor, retired Supreme Court Justice Tova Strasberg-Cohen, have taken the rabbinical courts to task for moonlighting as judges in privately-sponsored religious courts; contacting parties in divorce proceedings out of court without the knowledge of the other spouse; and keeping inaccurate minutes of cases.

A haredi Jerusalem religious court judge is under investigation by the State Prosecutor's Office after he was found to have ruled on divorce cases in which his daughter or son-in-law represented the husband or wife.