Three women were detained at the Kotel (Western Wall) today for wearing prayer shawls, tallits, in a manner usually worn by men but not by women. 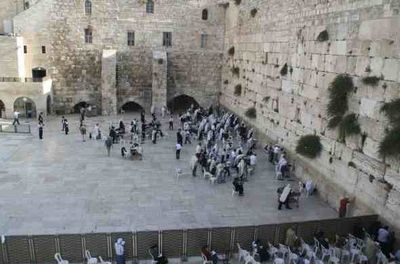 Three women were detained at the Kotel (Western Wall) today for wearing prayer shawls, tallits, in a manner usually worn by men but not by women, UPI reported.

The women belong to the protest group Women of the Wall, which campaigns for gender equality at the site, which is the second holiest in Judaism after the site of the Second Temple, which is located slightly southeast of the Kotel on the Temple Mount. The Kotel is part of the retaining wall of the Temple Mount and has been a site of prayer for Jews since the Second Jerusalem Temple was destroyed in the First Century C.E.

The three women were praying in the women’s section with approximately 40 other women when a female police officer told one of them to adjust her talit because she was wearing it like a man. Men drape their tallits over their shoulders and sometimes over their heads, as well, in both cases in shawl-like fashion rather than as a scarf. A male police officer then adjusted it.

After prayers, three of the women were detained. Police gathered their names and contact information and then released them, telling the women that they will be called later to come in for questioning.

The Kotel has been a flashpoint for gender issues and and for issues surrounding ultra-Orthodox attempts to control religious practice at public religious sites.

The state-appointed rabbi of the Western Wall is haredi.

Ultra-Orthodox worshippers have also hurled chairs and other objected at Women of the Wall groups.

Police rarely arrest or detain them, however.

Three women were detained at the Kotel (Western Wall) today for wearing prayer shawls, tallits, in a manner usually worn by men but not by women.