Republican controlled US House of Representatives to hold hearing on "the U.S. State Department’s Inadequate Response to Human Rights Concerns in Bolivia: The Case of American Jacob Ostreicher."

On Wednesday, the United States House of Representatives will hold a hearing on "the U.S. State Department’s inadequate response to Human Rights concerns in Bolivia: The Case of American Jacob Ostreicher."

Boliva routinely holds people for 18 months before formally charging them just as it is currently doing to Ostreicher, who  has been held for almost one year and who Bolivia believes was laundering drug money.

But what Bolivia says it believes really doesn't mean much at this stage.

The US Department of State's 2011 report on Human Rights in Bolivia, issued almost two months before Ostreicher was arrested there, opens with the following summary:

The principal human rights problems reported were killings and torture by security forces; harsh prison conditions; allegations of arbitrary arrest and detention; an ineffective, overburdened, and corrupt judiciary; a "partly free" media; corruption and a lack of transparency in the government; trafficking in persons; child labor; forced or coerced labor; and harsh working conditions in the mining sector.

America has tried to intercede for Ostreicher, even though we don't have much of a relationship with Bolivia which, besides being corrupt, also hates us.

But, heck, it's an election year and leave it to Republican politicians and their haredi friends to ignore those very real facts and instead try to exploit this situation to to hurt President Obama.

Not a big surprise when you know that the PR agency working for the Ostreichers is the ethically tainted 5WPR, linked to Israel's hard right, its Zionist Orthodox right, and Evangelical and Orthodox right wing groups here in the US.

Ostreicher deserves better than this, even if he was up to no good.

But he's not getting it because the sleaze of politics is trumping common decency. 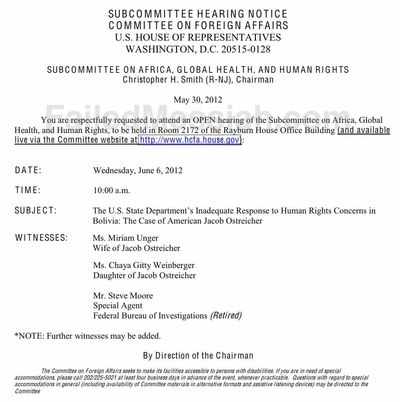 Republican controlled US House of Representatives to hold hearing on "the U.S. State Department’s Inadequate Response to Human Rights Concerns in Bolivia: The Case of American Jacob Ostreicher."