A Chabad site posts and then later removes an article detailing calls for a Chabad rabbi to resign over child sex abuse coverup allegations and VIN News removes an op-ed on the completion of the Daf Yomi cycle by Rabbi Natan Slifkin.

Another day, another virtual book burning.

CrownHeights.info posted and then later removed an article from the Australian newspaper The Age critical of Chabad leader Rabbi Avrohom Glick's behavior during the child sexual abuse scandal currently rocking the Chabad community there. The article focuses on calls from members of the community for Glick to resign.

But CrownHeights.info forgot to remove the comments, which are still posted.

Those comments overwhelmingly call for CrownHeights.info to censor the article, and man comments are critical of the community members in Melbourne calling for Glick's resignation:

if Chabad has any chance to improve heads need to roll. Who are we kidding ? until the grass roots don't stand to be heard and call a spade a spade we will get only worse.

Wether it's in Australia and especially here in the US the “heads” are to blame for all the tzoros we have.

REMOVE THIS!!
it is malicious lies by a misnaged who has it out for Chabad!
as well as self hating Jew who is trying to ruin good people's lives and get money for doing it!!

And this is a newsworthy item in a suposedly Lubavitch oriented blog because???

What's taking so long. Is this to be another Boro Park child molesting incident that ends in tragedy for the family? The family of the boy doesn't have to take much more of this SH...T. Do you read us loud and clear? Charge the guard. Send him to jail to rot there for at least a decade and then put him on probabation another 10 years. This is sick. El Sicko. A Stink of The Stink.

Is this really about rabbi glick stepping down? or is this about closing down the yeshiva which is obviously not the same as it was 20-30 years ago

99% of the members of the chabad community do not want rabbi glick to step down, and the people that are calling him to step down are people who are not jewish or frum, or people who hate chabad and wanted to see the end of chabad for a long time and finally found a way to try and do it.

no, he should stay, he obviously had no clue. furthermore this is just wretched to go after someone, a good frum yid with a good heart and a rebbi nontheless, who did nothing wrong and is being maliciously targeted. pedophilia in the community is few and far between, it is only in rare isolated incidents. we are different, we are better. we dont need to worry about it!

Its a way of getting back at the yeshiva with letting out there own frustration. Am sure if they ment well. They would go about it with more class

I wonder if crownheightswatch will ever expose the hanhala here that have been covering it up for years, and have known about molesters in our yishivas and did nothing about it.

Where is the proof that he knew?
If there is none, why should he step down?

Anyone who knows how Yeshivah works, knows that DSC worked for the Yeshiva center, not the school.

for the record, having money doesn't make you a philanthropist, giving tzedokah does. Everyone who knows moshe gordon knows he is wealthy but by no stretch of the imagination is he a philanthropist. Also, it is ironic that he is up in arms when it was his wife who was involved in helping the principal of adas school who molested girls escape the country before the authorities could get to her. You can't live on both sides of the fence.

The piece, still posted on Slifkin's blog, reads in part as follows:

But who are the guests of honor at the grand Siyumim? Who performs the siyum, who makes the speeches, who gets the glory? Not the Daf Yomi participants and not even the maggidei shiurim. Instead, it's the roshei yeshivah.

This is not only tragic; it's also ironic. For the roshei yeshivah are the ones who not only do not learn Daf Yomi; they also often speak out against it!

Now, to be sure, there is room to criticize Daf Yomi. The breakneck pace means that the learning is often superficial and not committed to memory. But there is room to criticize the yeshivah style of learning, too. Spending endless weeks on three lines of Gemara is not exactly the traditional form of study. And learning without coming to clear halachic conclusions is entirely in opposition to the reasons for learning Torah that the Rishonim give.

But whatever the respective merits and drawbacks of the different approaches to learning Gemara, one thing is clear: yeshivos don't do Daf Yomi. Rabbi Meir Shapiro wanted all Jews to be studying the same material at the same time; yeshivos make no such effort. Rabbi Meir Shapiro wanted masechtos of the Gemara that are not usually studied to receive their due respect; yeshivos ignore those masechtos on principle. Daf Yomi is about covering ground in Shas, whereas in most yeshivos, the emphasis is on endless analysis of a few lines of Gemara - the "oker harim" approach instead of the "Sinai" approach. Most fundamentally of all, Daf Yomi is for ba'alei battim, the laymen from whom society is built, not yeshivah students. Why, then, would roshei yeshivah be the ones getting the glory at the Daf Yomi Siyum HaShas, and giving intricate pilpulim in Gemara (and in Yiddish!)? Mah inyan Rav Elya Ber Wachtfogel aitzel Sinai?

If I'm not mistaken, the explanation is as follows. The grand pomp of the Siyum HaShas, with tens of thousands of participants, offers Agudas Yisrael an opportunity to further one of their primary goals: strengthening the Daas Torah form of rabbinic authority, and specifically that of roshei yeshivah.

(Ironically, this latter aspect is not only contrary to tradition of Judaism in general; it is even contrary to the original form of Agudas Yisrael. The Council of Torah Sages of Agudath Israel were originally mostly either community rabbis or those with experience in such roles; today, they are virtually all roshei yeshivah who have never functioned in any such role.)

These are thy Gedolim, O Israel! That is what the siyum haShas does. Make the biggest public Jewish event, and give the stage exclusively to the people that you want to publicize as the heroes and leaders of the Jewish community.…

Daf Yomi is about the ordinary man who takes his ArtScroll Gemara on the train with him every morning on the way to work. He is the hero of the Siyum HaShas. Let's grant him his well-deserved honor!

Why do haredi rabbis want to censor the Internet or, if possible, ban it?

You just read why. 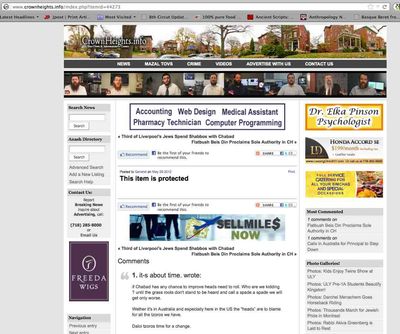 A Chabad site posts and then later removes an article detailing calls for a Chabad rabbi to resign over child sex abuse coverup allegations and VIN News removes an op-ed on the completion of the Daf Yomi cycle by Rabbi Natan Slifkin.