Inspired by the late Chabad-Lubavitch rebbe who "prophesized" that precious stones were "divinely" buried in the area, the firm has been mining for about a decade along the steep hills and lush valleys around Haifa.

Inspired by the words of a revered rabbi who prophesized that precious stones were divinely buried in the area, the firm has been mining for about a decade along the steep hills and lush valleys that surround the city of Haifa.

Now, Shefa Yamim, the first and only diamond explorer in Israel, says it has found strong signs that significant diamond deposits are indeed hidden in the Holy Land, surprising many who had dismissed the mission as a pipe dream.

Potential new mines are big news in an industry that gets most of its diamonds from 20 or so mines, and where no large discovery has been made in 15 years.

Israel has long been a global leader for polishing diamonds, but it was never considered to be a possible source for rough diamonds, which it imports from abroad. Top Israeli diamond dealers even have their own mining operations in Africa but with booming demand for the gems driven by prosperity in China and India there are certain to be many more speculative projects.

Shefa Yamim's workers have dug up thousands of geological indicators -- including 77 macro and micro-diamonds -- in their trenches and boreholes, said Chief Executive Avi Taub.

"It's a mission ... We're talking about divine providence," Taub, an Orthodox Jew who wears a skullcap and a long, white beard, told Reuters at the company's offices in the coastal city of Akko. "I hope I'm going to have the right to reveal it."

In 1999, Taub founded Shefa Yamim, which means "bounty of the seas" in Hebrew, based on a conversation that took place 11 years earlier in Brooklyn, New York between the late Rabbi Menachem Schneerson and the then mayor of Haifa. The dialogue was caught on video.

"The uniqueness of Haifa is that it has a sea and it has a valley -- and in the valley are precious stones and gems. The holy one, blessed be he, did a wondrous thing, he concealed them in the depths of the earth," the rabbi told his visitor.

Many of Schneerson's followers believe him to be the messiah, making the comments a decree of sorts, and Taub answered the call.

Religious belief and biblical verse have inspired others to search for natural resources in the Holy Land.

In the same year Schneerson spoke about precious stones buried near Haifa, he also received a letter from a geologist who is now the chief explorer of Givot Olam, which is drilling for oil in central Israel. The letter described how the Bible and Jewish commentary both contain "a poetic description of fundamental principles of modern petroleum geology".

Texas-based Zion Oil and Gas is exploring for hydrocarbons in the same area as Shefa Yamim and was inspired by a map of the 12 biblical tribes of Israel.

These companies are all optimistic, but have yet to announce commercial finds.

Shefa Yamim has licenses to explore 165,000 acres. The company's website is filled with hard geological data, but also contains Jewish scripture and commentary.

When Shefa Yamim chose to go public in Tel Aviv, a skeptical Israel Securities Authority delayed the issuance for a year until the Energy Ministry, which oversees the country's natural resources, could confirm the findings. The company was listed in April and has kept a market value of roughly $62 million.

Research analysts at Canada's Canaccord Capital think early-stage companies like Shefa Yamim that have found diamond-bearing kimberlite have only a 5-10 percent chance of success.

Only about 1 percent of kimberlite pipes - the geological structures where diamonds are concentrated - that have been discovered to date have been economically viable. They are mostly found in South Africa, Siberia, North America, Brazil and Australia.

Shefa Yamim has until now been focusing most on alluvial mining, which is shallower along the riverbed in the valley. It will need a significant injection of capital if it is to dig deeper to find bigger diamonds and move closer to its goal.

Shefa Yamim's consultant geochemist Mark Fedikow of Mount Morgan Resources in Winnipeg, Canada, believes its chances for success are as high as 20-30 percent due to the abundance of mineral indicators. He thinks it could reach the point of production in three to five years.

"There is no reason why you can't connect faith with economics here," Fedikow said. "There is no basis to throw up your hands and laugh. You accept what the rabbi said and developments after are not based on faith but on hard fact."

You may recall that similar claims by 'Diamond' Joe Gutnik, a Chabad rabbi, cost lots of Chabad followers huge amounts of money. But Gutnick's friends, relatives and several haredi and Chabad organizations (some suspiciously holding stock they didn't actually buy themselves) did very well because they sold just before the stock's value tumbled.

Many believe what Gutnick and his Chabad and haredi helpers did is pull off a massive affinity stock fraud.

But Diamond Joe, an Australian citizen politically connected in several countries, including Israel, and who ws then very rich, escaped prosecution.

And then there was the Givot Olam Oil Exploration scam, also based on a 'prophesy' by the Chabad-Lubavitch rebbe, Menachem Mendel Schneerson.

Last June a Chabad news website appeared to be participating in a pump and dump scam with Givat Olam. But the Israeli business daily Globes exposed the alleged scam.

The stock price of Givat Olam, which soared in part with the claims reported by Chabad.info in Hebrew and English and circulated by word of mouth in the Chabad community, have dropped steadily since Globes outed them: 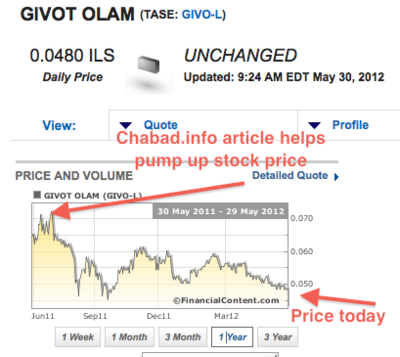 Strange things, these 'prophesies' made by false messiahs…

Inspired by the late Chabad-Lubavitch rebbe who "prophesized" that precious stones were "divinely" buried in the area, the firm has been mining for about a decade along the steep hills and lush valleys around Haifa.