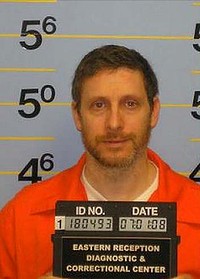 Kramer allegedly sexually abused children in Chabad’s Yeshiva College. When Rabbi Yitzchok Dovid Groner, the head of Chabad in Australia, was confronted with allegations that Kramer was molesting children, he helped Kramer flee Australia and avoid arrest by Australian police.

Kramer spent a decade in Israel and then went to St. Louis, Missouri, where he molested more children. Kramer was arrested there in 2007 and charged with sexual misconduct and statutory sodomy when a non-Chabad Orthodox rabbi, Zev Smason, reported him to police after Kramer fondled a 12-year-old boy and masturbated in front of him. Kramer pleaded guilty and was sentenced to seven years in prison. He was recently released.

The St. Louis Jewish community did not know about the Australian allegations against Kramer until he was arrested for abusing children.

Kramer’s attorney Matthew Chase, described to FailedMessiah.com as a “frum apoligist…who defends all haredi practices,” told St. Louis.com that "Mr. Kramer vehemently denies everything coming out of Australia. They never bothered to charge him with a crime until December just past. Kind of makes you wonder why they never bothered. Perhaps because there really wasn't anything there."

Documents filed by Australia for the extradition claim that Kramer sexually assaulted four boys, all aged 10 or 11, from 1989 through 1992. The abuse took place inside Chabad’s Yeshiva College and outside it. One of the boys accused Kramer of molesting him hundreds of times. In December, Australia charged Kramer with multiple counts of indecent assault and indecent acts.

The documents also say that someone contacted by Yeshiva College approached Kramer, who allegedly admitted “sexually abusing the children, but indicated…that the children had initiated the touching, and that they enjoyed it, and that no harm had been done."

Chase also claimed that Kramer left Australia because he had mistakenly overstayed his visa, not because of alleged child sexual abuse.

Kramer has 11 children and is currently separated from his wife.

Cyprys had an arrest for molesting a child but was allowed to plead to a lesser charge, allegedly after Chabad leaders lobbied the court for him.

Cyprys went on to allegedly rape or molest at least 12 more children from the school from the late 1980s through most of the 1990s.

Chabad’s Australian head, Rabbi Yitzchok Dovid Groner, allegedly covered up these crimes and coerced parents and victims so that they would not report the crimes to police.

An Australian court is currently weighing evidence against Cyprys and is expected to rule Monday that the case can proceed to trial.