Neturei Karta burned the Israeli falg and chanted anti-Israel slogans in Bnei Brak as local haredim surrounded them and demanded that they stop. 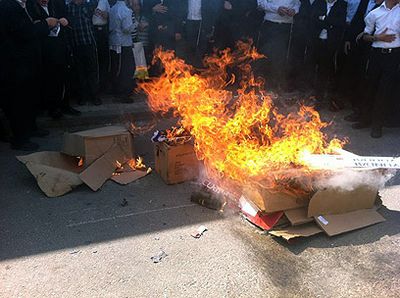 While the State of Israel celebrated 64 years of independence, a group of Neturei Karta demonstrators  burned Israeli flags in Bnei Brak.

An eyewitness told Ynet that several members of the anti-Zionist Jewish sect rioted in front of the Lithuanian Yeshiva and set Israeli flags on fire, while calling out slogans against Israel.

According to the eyewitness, dozens of Bnei Brak residents gathered around the demonstrators and protested against their anti-Israel behavior.

Several of the Yeshiva students confronted the protesters until they eventually left the premises.

One radical haredi activist told Ynet that he and his friends have been trying to expand their protest outside of Jerusalem. He expressed his satisfaction with the groups' protest in Bnei Brak.

"We will continue to express our anti-Zionist and anti-Israel views. It is our truth," he said.

Neturei Karta burned the Israeli falg and chanted anti-Israel slogans in Bnei Brak as local haredim surrounded them and demanded that they stop.