More non-Jewish couples have embraced Jewish marriage rituals over the last decade. Some stomp a glass, or a light bulb as a popular substitute. Others recite vows under a canopy called a chuppah. 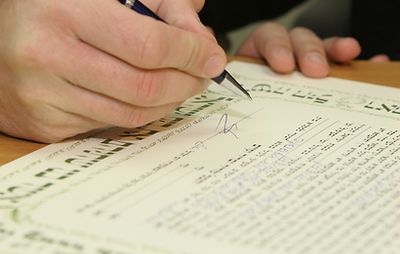 (AP) – Jessie Engelman and her fiancé plan to wed later this year and sign a ketubah, the traditional Jewish marriage contract.

But neither is Jewish, nor are they evangelical Christians looking to honor their biblical connections to the faith.

More non-Jewish couples have embraced Jewish marriage rituals over the last decade. Some stomp a glass, or a light bulb as a popular substitute. Others recite vows under a canopy, called a chuppah.

But it is the ketubah, or a less Jewish cousin called a "Statement of Our Love," that often catches the eye of couples with no familial or cultural ties to Judaism.

The demand for "non-Jewish" ketubot increases every year at the sites JudaicConnection and ShopKetubah, both run by Cindy Michael in Fort Lauderdale, Florida.

The number of ketubah artists setting up shop online has exploded in recent years, making it that much easier for non-Jewish couples to embrace the practice.

The ketubah is more than just fancy calligraphy. It's often poster-size and ornate, suitable for framing later, with artwork either as backdrop or accompaniment.

She works with many ketubah artists who offer words of love and loyalty specifically for non-Jewish couples. One offers an Apache wedding blessing, and another uses inspirational text from New Age guru Kahlil Gibran.

"Many times they contact us after having attended Jewish friends' weddings," Michael said.

Jannine Medrana Malave and her husband, Nelson, had a traditional Catholic wedding. Their ceremony included touches reflecting her Filipino roots and his Puerto Rican ones, but they also had a ketubah in a round design with English and Hebrew, signed by, among others, the priest who married them.

The ketubah was a gift from two close friends they consider their "Jewish mothers," but it was Nelson's idea after he noticed the ketubot in the shop of the National Museum of American Jewish History, where Jannine works as director of donor relations and special events.

"We like to learn about other cultures and other traditions," said Jannine, 34. "It's hanging in our living room, next to our crucifix no less."

Stephanie Caplan is a ketubah artist in New York. She's been doing custom work for non-Jewish clients who found her offline and through her website, TheKetubah.com, for several years. She recently added more affordable prints suitable for couples who want to celebrate but not practice the faith.

"I always felt it was something that everybody could have," she said. "I didn't see why it should just be for Jews. It can be the thing that reflects the spirit of the day, more than those 50,000 photographs you took at your wedding. It's just a nice energy."

That's what New York native Edward Cleveland Jr. and his wife, Maki, thought when they hired a ketubah maker.

Gerald Fierst, who published a book last year on 21st-century marriage, "The Heart of the Wedding," said Muslims, Quakers and others also have traditional religious marriage contracts.

"A lot of Jewish culture has become mainstream," he said. "People don't think of it as religious. They think of it as, `Isn't that a nice tradition?'"

More non-Jewish couples have embraced Jewish marriage rituals over the last decade. Some stomp a glass, or a light bulb as a popular substitute. Others recite vows under a canopy called a chuppah.