"The Rabbinical Court of Appeals rode roughshod over basic procedural rules and the principles of natural justice. It demonstrated contempt for the special conversion courts, and above all, it hurt and did a shocking injustice to the petitioners and their children." 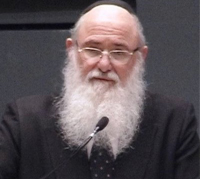 Israel's High Court affirms that thousands of Jewish conversions are kosher
Decision comes after petition was filed by two Israeli women whose conversions were retroactively overturned by rabbinical courts, 15 years after the conversions had been recognized by the state.
By Yair Ettinger • Ha’aretz

The High Court of Justice has affirmed the validity of thousands of conversions called into question by the Rabbinical Court of Appeals in 2008, but refused to discuss the rabbinical courts' authority to annul conversions in general.

"The Rabbinical Court of Appeals rode roughshod over basic procedural rules and the principles of natural justice," wrote former Supreme Court President Dorit Beinisch in Tuesday's verdict. "It demonstrated contempt for the special conversion courts, and above all, it hurt and did a shocking injustice to the petitioners and their children."

In both cases, the rabbinical courts annulled the conversions while discussing the women's divorce proceedings, and their decisions were later upheld by the Rabbinical Court of Appeals.

But the court of appeals did not make do with upholding the lower court verdicts: In its 2008 ruling on the first woman's case, a panel headed by Rabbi Avraham Sherman said that thousands of other conversions authorized by a network of special conversion courts then headed by Rabbi Haim Druckman should also be overturned. While Sherman's statement was not legally binding, it caused many converts to worry that their conversions, too, would be retroactively annulled.

"You read it and don't believe it," wrote Justice Miriam Naor in her concurring opinion.

The women and various organizations that joined their petition thus asked the High Court to rule not only on their particular cases - which had already been resolved, since their Jewishness had since been affirmed by the Tel Aviv Rabbinical Court during a new hearing on their original cases - but on the rabbinical courts' authority to overturn conversions in general. This, however, the justices declined to do. Justice Elyakim Rubinstein, writing for the court, said the justices preferred not to intervene in this issue right now "out of hope that the buds of systemic change that have sprouted since the petition was filed [in 2008] will develop and bear fruit."

He was referring to a directive issued by the attorney general in 2010 that was drafted with Sephardi Chief Rabbi Shlomo Amar, the president of the Rabbinical Court of Appeals. That directive stated that if a conversion's validity is challenged during a rabbinical court hearing, the case must be transferred to the president of the rabbinical court in question. In addition, the attorney general must be informed, and will become a party to the case if it involves a minor - meaning any case involving a woman with children, since annulling her conversion would automatically make the children non-Jewish - or anyone else deemed legally incompetent. This will make it harder for rabbinical courts to overturn conversions without a fight.

But the High Court did overturn Sherman's 2008 ruling denouncing all conversions by the special conversion courts, as well as the initial ruling by the Ashdod Rabbinical Court that Sherman's decision had upheld. This was a vindication not only for the affected converts, but for Druckman - whose good week continued yesterday when he received the Israel Prize for lifetime achievement.

While Sherman's ruling was ostensibly based on Jewish law, it was also part of a broader power struggle between the Haredi (ultra-Orthodox ) community, represented by Sherman, and the religious Zionist community, represented by Druckman. The government originally set up the special courts headed by Druckman to circumvent the rabbinical courts' monopoly on conversions, because the Haredi-controlled rabbinical courts had adopted stringent requirements that were seen as deterring potential converts.

The petitioners' attorney, Aviad Hacohen, welcomed the High Court ruling even though it failed to satisfy all the petitioners' demands. "The court's harsh statements speak for themselves," he said, adding that he hoped "their content would be internalized" by the rabbinical courts.

"The Rabbinical Court of Appeals rode roughshod over basic procedural rules and the principles of natural justice. It demonstrated contempt for the special conversion courts, and above all, it hurt and did a shocking injustice to the petitioners and their children."