« Is The New American Haggadah Worth Buying? | Main | The Haredi Media Mafia »

Israelis trying to visit the Beersheba Zoo today found the gates closed to all non-haredim unless they passed a modest clothing test, and all zoo activities were gender segregated – despite the fact that this violates the law. 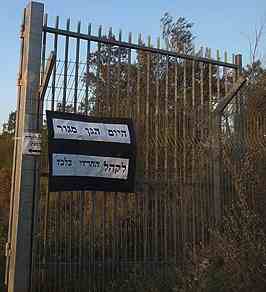 Only haredim allowed entry to Beersheba zoo
Public zoo visitors discover it is open only for haredi public. Following complaints, visitors were allowed inside only if 'appropriately dressed'
Ilana Curiel • Ynet

The fourth day of the holiday drew large numbers of travelers out of their homes, but those who chose to visit the Beersheba zoo found closed gates. The zoo was open for the haredi public only, visitors argued, without any prior notice. A small sign on the zoo's gate confirmed the allegations, while the zoo's management insists that entrance to the zoo was not limited.

"We arrived at the zoo at 9:50, 10 minutes before it opens," said Avigail Kanterovich, who arrived at the zoo with her family, friends and their children. "We tried to buy tickets, and the cashier told us they will not allow us to enter, since it is only for haredim today."

According to her, there was no prior notice, and nowhere did it say that the zoo would be closed for visitors today according to religious affiliation. "They performed selection at the entrance, and didn't allow even national-religious people to enter. Only the haredim."

Kanterovich said that only after a long argument they were allowed entrance. "We were furious. They let us wait in the sun for 20 minutes, and no one came to talk with us." According to her, only later the management put up a sign stating the entrance was restricted to haredim only. Eventually they were allowed in the zoo.

The municipality: Living in harmony

Another visitor, Yael, also saw the sign. "Outside, the public was mixed," she recounts. "Eventually they let us in, but everything inside was separated for boys and girls." Yael too said the visitors had to wait outside for a while before they could enter.

The zoo's manager explained that the site was closed due to a special event for the Orthodox public, but everyone who wished to enter could do so if appropriately dressed.

The Beersheba municipality said that as part of the holiday's event, the city held an event for the ultra-Orthodox public at the zoo. However, contrary to the allegations, entrance was allowed to everyone who wanted to participate in the event.

"In Beersheba we're living in harmony, religious and seculars together, and we will continue to do so in the future," the municipality stated.

Israelis trying to visit the Beersheba Zoo today found the gates closed to all non-haredim unless they passed a modest clothing test, and all zoo activities were gender segregated – despite the fact that this violates the law.