The government aims to deport tens of thousands of foreigners who crossed into Israel illegally, Interior Minister Eli Yishai declared at a conference organized by right-wing groups earlier this week. 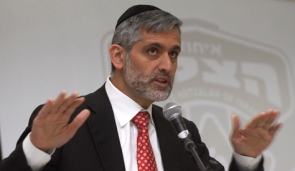 Interior Minister: Israel must deport illegal immigrants, even if it costs money
According to Eli Yishai, foreigners' attempts to breach the borders will increase in the months to come.
Yair Ettinger • Ha’aretz

The government aims to deport tens of thousands of foreigners who crossed into Israel illegally, Interior Minister Eli Yishai declared on Sunday at a conference organized by right-wing groups in Ramle.

"The border fence is important, and the detention facility is much more important," Yishai said, referring to the facility being built near the country's southern border to hold would-be refugees and labor migrants arrested after crossing over.

"The goal is not only to prevent their entry into Israel, but also to remove the 58,000 infiltrators who are already here," Yishai said, adding, "Look at what's happening in Eilat and Arad and is about to happen in Ashdod and in Netanya as well. We all know about Tel Aviv."

Yishai was addressing the fifth annual Ramle Conference, sponsored by the right-wing Komemiyut organization and a religious garin, or core group, whose members have settled in this mixed Arab-Jewish city.

Activists on behalf of labor migrants came to the conference - whose theme this year was the relationship between Israel's Jews and non-Jewish minorities - to protest.

According to Yishai, foreigners' attempts to breach the borders will increase in the months to come, "because they're convinced that once they're in Israel it is very hard to remove them, and to my great regret that is true. I hope that eventually we'll succeed in creating ties with Sudan and Eritrea and other countries so that it's possible to remove the migrants who've reached Israel in exchange for payment to a third country."

"In other words," Yishai went on, "it's worth our while to pay. I call it a demobilization allowance, [or] a deportation allowance ... I'm willing to pay money ... to finance their return to their state, their homeland, or another country, as long as they leave Israel ... in order to preserve the Zionist enterprise of the State of Israel, which is endangered. It can be said that we stopped this threat. In the coming months, immediately upon completion of the detention facility, we will start enforcement, it will be very painful, very difficult, with very high fines. The process will be very, very complex but there is no alternative in dealing with the problem. You are all familiar with what is happening in Tel Aviv, everywhere, terrible things, very difficult scenes."

For his part, Kiryat Arba Chief Rabbi Dov Lior called on repatriating the migrants to their homelands, following the model of post-World War II Europe, when "millions of people" were moved about from place to place.

The government aims to deport tens of thousands of foreigners who crossed into Israel illegally, Interior Minister Eli Yishai declared at a conference organized by right-wing groups earlier this week.