The appeals court ruled that Lebovits' conviction is reversed and it ordered a new trial. Why? Because the D.A. did not promptly turn over a police detective's notes to the defense that documented an alleged attempt to bribe an alleged victim of Lebovits. 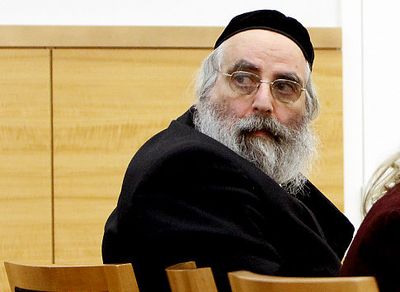 SUPREME COURT OF THE STATE OF NEW YORK

[*1]The People of the State of New York, respondent,

Appeal by the defendant from a judgment of the Supreme Court, Kings County (DiMango, J.), rendered April 12, 2010, convicting him of criminal sexual act in the third degree (eight counts), upon a jury verdict, and imposing sentence.

ORDERED that the judgment is reversed, on the law and as a matter of discretion, and a new trial is ordered.

The defendant was charged with, inter alia, 10 separate counts of criminal sexual act in the third degree. The indictment alleged, among other things, that the defendant engaged in oral sexual conduct with the complainant, a then-16-year-old boy, on 10 separate occasions, approximately once a month, between May 2, 2004, and February 22, 2005.

At trial, the complainant testified with respect to the various alleged incidents of sexual abuse by the defendant. However, the topic of the rabbi and the bribery issue was not raised by the People on direct examination of the complainant. [*2]

On cross-examination of the complainant, defense counsel inquired as to the complainant's drug history and the details of the alleged incidents, but did not raise the topic of bribery or extortion. The defense simply asked the complainant to confirm that he knew the rabbi, which the complainant readily confirmed.

The following day, for the first time, the People turned over to the defense, inter alia, the detective's handwritten notes dated January 14, 2009, documenting a conversation wherein the complainant told the detective that the rabbi had attempted to bribe him. The defense moved for a mistrial, arguing that the People had failed to comply with their ongoing obligations of disclosure pursuant to People v Rosario (9 NY2d 286, cert denied 368 US 866) and Brady v Maryland (373 US 83), and the defendant had been substantially prejudiced by the late disclosure.

The defense called the rabbi as its only witness, and he testified that the complainant had told him he was pursuing the charges against the defendant to make money. On cross-examination, the prosecutor asked the rabbi whether he himself had previously been accused of sexually abusing two young boys whom he had taught. The defense objected to the questions and, at a sidebar, the Supreme Court noted that the prosecutor must have a good faith basis for asking the witness about these alleged prior bad acts. The prosecutor told the Supreme Court that the detective handling the complainant's case had also interviewed two friends of the complainant, who had each told the detective that the rabbi had sexually abused them while they were students of the rabbi. The defense's objection was overruled and the questions were permitted to stand. The rabbi denied the truth of the accusations, and denied that any such accusations had ever been made against him. No further evidence or testimony was elicited with regard to these allegations against the rabbi.

During summation, the prosecutor stated that the rabbi was an accused child molester and that he used his position as a teacher to abuse young boys. When the defense objected to this statement, the Supreme Court instructed the jury that "you will recall the evidence," although the Supreme Court sustained the defense's objection to the prosecutor's second statement to this effect.

The defendant was convicted of eight counts of criminal sexual act in the third degree. On appeal, the defendant contends, inter alia, that the evidence was not legally sufficient to establish the defendant's guilt beyond a reasonable doubt and that the verdict of guilt was against the weight of the evidence because the only direct evidence of the crimes was the testimony of an admitted former drug addict, whose poor memory of the facts rendered his vague and nonspecific testimony incredible. The defendant also contends that the Supreme Court should have granted his motion for a mistrial based on the People's Rosario and Brady violations, and that the remedy crafted by the Supreme Court was insufficient to cure the substantial prejudice suffered by the defendant. The defendant further argues that the prosecutor was improperly permitted to question the rabbi with regard to allegations of prior bad acts without establishing a good faith basis for asking the questions, and overstepped the bounds of proper advocacy by calling the rabbi an accused child molester on summation.

Viewing the evidence in the light most favorable to the prosecution (see People v Contes, 60 NY2d 620), we find that the evidence was legally sufficient to establish the defendant's [*3]guilt beyond a reasonable doubt. Moreover, upon our independent review pursuant to CPL 470.15(5), we are satisfied that the verdict of guilt was not against the weight of the evidence (see People v Romero, 7 NY3d 633).

However, we agree with the defendant that the Supreme Court improvidently exercised its discretion in declining to grant a mistrial. The People must turn over to the defense any prior statements by a witness which relate to the subject matter of that witness's testimony for use on cross-examination (see CPL 240.45[1][a]; People v Rosario, 9 NY2d 286), and the material must be provided before the prosecutor's opening remarks (see CPL 240.45[1]). As the People correctly concede, it was a violation of this rule to fail to turn over the handwritten notes of the interview between the complainant and the detective regarding the alleged bribery attempt by the defense's only witness before the start of the trial. Contrary to the People's contention, the prejudice to the defendant was not obviated by the remedial action taken by the trial court (see People v Thompson, 71 NY2d 918, 919-920; People v Perez, 65 NY2d 154, 159-160; People v Mitchell, 14 AD3d 579, 580; People v Mackey, 249 AD2d 329, 330). "The fairness concept embodied in the Rosario rule cannot be said to have been satisfied when pretrial statements revealing a potential trap for the cross-examiner are furnished to defense counsel only after the trap has sprung" (People v Perez, 65 NY2d at 159). Here, the untimely disclosure of the interview notes precluded the defense from fully and adequately preparing for cross-examination and set a trap for the defendant which had already sprung at the time the notes were finally furnished (id.). Since the defense opened the door to the complainant's claim of bribery by the key defense witness by asking the complainant on cross-examination about the rabbi, disclosure of the written statements after the fact was inadequate to protect the defendant's rights pursuant to Rosario (id. at 159-160).

Accordingly, in light of the substantial prejudice to the defendant which resulted from the late disclosure of the Rosario material, a new trial is required (id. at 160; see People v Mitchell, 14 AD3d at 580; People v Smith, 190 AD2d 700, 701).

With regard to the defendant's contention that the prosecutor was improperly permitted to impeach the credibility of the rabbi by questioning him about alleged prior bad acts without a good faith basis for asking those questions, the Supreme Court properly held that the prosecutor established a good faith basis for the questions (see People v Jones, 193 AD2d 696, 697; cf. People v Bennett, 50 AD3d 1047; People v Olibencia, 45 AD3d 607, 608).

However, in light of the rabbi's unequivocal testimony that he had not sexually abused two young boys and had never been accused of doing so, the prosecutor's comment on summation that the rabbi was an accused child molester had no basis within the record and was improper. The Supreme Court's response, directing the jury that they will "recall the evidence," also was improper since, in light of the rabbi's denials, there was no evidence within the record from which the jury could draw an inference that the rabbi had been accused of molesting young boys.

In light of our determination, we need not reach the defendant's remaining contention.
DILLON, J.P., ENG, BELEN and SGROI, JJ., concur.

Clerk of the Court

The appeals court ruled that Lebovits' conviction is reversed and it ordered a new trial. Why? Because the D.A. did not promptly turn over a police detective's notes to the defense that documented an alleged attempt to bribe an alleged victim of Lebovits.