The government claims that Rabbi Yekutiel Abuhatzeira, a descendent of a distinguished rabbinic dynasty and a son of the Baba Sali, owes NIS 9.5 million in back taxes. 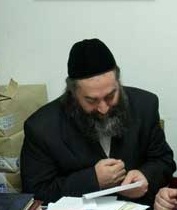 One of the Abuhatzeira family rabbis owes the government NIS 9.5 million in taxes, according to the Israel Tax Authority.

The authority claims that Rabbi Yekutiel Abuhatzeira, a descendent of a distinguished rabbinic dynasty and a son of the Baba Sali, did not pay taxes on religious services he provided between 2003 and 2009.

Abuhatzeira insists the money was not revenue, but rather donations and gifts he received in exchange for blessings he bestowed. The case will be decided in court.

In addition, the taxman found more than NIS 10 million in bank accounts owned by the rabbi and his children that could not be explained.

Abuhatzeira is a respected rabbi, and celebrities and businessmen frequently visit him at his home. The tax investigators broke with protocol and came to the rabbi's Ashdod home to question him, as opposed to calling him in to their offices. However, the rabbi did not provide all the information they requested, said tax figures.

Abuhatzeira's lawyer expressed surprise yesterday when he heard the story had leaked to the media, and slammed the loose lips at the Tax Authority.

The Tax Authority "shows ignorance in everything connected to rabbis' courts," said Attorney Udi Barzily. The rabbi himself was apparently insulted by the treatment and is considering turning to higher-ups within the Tax Authority or to the state comptroller.

The leak may be part of efforts by the taxman to warn other rabbis, said Barzily.

"The Tax Authority is ignorant in its understanding of what a rabbi is and how rabbis operate. People who succeeded in life give the rabbi a donation so that the rabbi will give it to those in need. The Tax Authority wants the money to pass through nonprofits. In no country are rabbis sent tax bills, and they certainly aren't leaked to the press," he said.

The Tax Authority fiercely denied the allegations that the affair had been leaked, but confirmed that Abuhatzeira had been issued a bill, and noted that the matter is currently under negotiation.

Here's a Ha'aretz article from 2004 on a previous Abuhatzeira brush with the tax authority:

The kabbala is taxable
Until very recently there appeared to be absolutely no connection between the kabbala (Jewish mysticism) and a kabbalah (receipt). Income from services rendered by a kabbalist rabbi was not taxed, and required no receipt.
By Shahar Ilan • Ha’aretz
6-24-2004

Until very recently there appeared to be absolutely no connection between the kabbala (Jewish mysticism) and a kabbalah (receipt). Income from services rendered by a kabbalist rabbi was not taxed, and required no receipt. However some interesting recent developments raise the possibility that the kabbalist mystic's status is like that of any other taxpayer.

Seven years ago, Yossi Bar-Moha, a former Haaretz reporter and current chairman of Israel's Journalists' Association, disclosed that the bank account of kabbalist Rabbi Elazar Abuhatzeira, grandson of the Baba Sali, contained NIS 250 million in gifts and contributions. In a joint appeal to the Supreme Court by Bar-Moha and the Movement for Progressive Judaism (the Reform movement), Bar-Moha claimed that the revered Abuhatzeira's income had already grown to NIS 500 million.

Since Bar-Moha's investigation, a police investigation of the rabbi's finances was initiated, and was closed without result.

Negotiations between the rabbi's attorneys and income tax authorities grappled with questions regarding the requirement that the rabbi pay tax on gifts. Finally, both sides came to an extremely peculiar agreement. Abuhatzeira was to pay NIS 15 million to the Income Tax Authority without admitting in any way that he was actually paying tax. The rabbi handed over NIS 5 million to various non-profit organizations. A statement in the agreement claimed that one of the rabbi's followers contributed the money.

The petitioners were not the only ones who thought that the agreement presented many problems. In a letter sent in early April, Ya'akov Shapira, a senior aide to the attorney general, wrote that the agreement was not based on the opinion of former attorney general Elyakim Rubinstein, and that Rubinstein became aware of the decision only by accident.

Shapira disclosed that "Rubinstein's opinion was not presented in the agreement," but that he was forced to accept the opinion of the fiscal department of the State Prosecutor's Office, a ruling which may not be overturned. Rubinstein also concluded that a tax payment agreement must be made with the taxpayer himself - not with one of his contributors.

The basic question of the fairness of the agreement with Abuhatzeira pales in comparison to one claim made by the mystic's attorney, Prof. David Glicksberg. "Monetary gifts were never taxed in the past," writes Glicksberg., adding the request for his client in this regard "was a first, and so far a last." Therefore, if the requirement that kabbalist rabbis pay taxes has indeed been transformed from law into action, very few are aware of it.

Unlike Bar-Moha and the Progressive Movement, income tax officials considered the agreement with the kabbalist rabbi to pay tax on contributions and gifts to be a precedent-setting achievement. In October last year, the Income Tax Authority told Gad Lior of Yedioth Ahronoth that the agreement with Abuhatzeira meant that it would begin taxing other rabbis. Lior says that the estimated value of gifts and contributions to kabbalist rabbis ranges between NIS 1-4 billion.

In Bar-Moha's article for Haaretz, he presented a long list of mystic rabbis with enviable incomes, among them Rav David Abuhatzeira of Nahariya, brother of Baba Elazar, and two other brothers presiding in Ashdod, Yekutiel Abuhatzeira and Rafael Abuhatzeira. The Netivot court of their patriarch, the Baba Sali, was inherited by his son, Baruch, who established an entire industry of amulets and blessings around his father's grave.

Baba Baruch's main competitor in Netivot is Rav Baruch Ifergan, called the "Roentgen" or X-ray. Bar-Moha told Haaretz that as far as he knows, income tax officials are working to extract taxes from Ifergan, but ignoring many other mystics.

Eyal Marcus of Maariv has set out a list of leading mystics who provide spiritual counseling to senior business people, apparently the most lucrative religious service. Marcus wrote that Rav Elazar Abuhatzeira leads other rabbis in Israel in providing spiritual business advice, and is especially gifted in the field of diamonds. This raises the issue as to whether or not contributions given to a rabbi who provides spiritual advice to businessmen constitute payment for a consultation.

Income tax officials have examined how Western nations cope with similar tax issues. They have concluded that, in general, gifts to religious figures are considered to be income, but decisions regarding individual gifts are based on court rulings rather than legislation. In Israel, the subject has yet to be brought to court. In other countries, two questions are commonly considered when deciding whether a gift to a religious figure represents income or does not: First, is the gift cyclical - that is, are many installments paid over a stretch of time; second, does the gift-giver receive something in exchange, like a blessing.

Income tax officials and the attorney general have taken seven years since Bar-Moha's investigation to formulate policy in this matter. Shapira's letter in April indicates that Rubinstein had given Income Tax Commissioner Tal Yaron-Eldar his legal opinion, which states, "If there is an exchange for services, it must be taxed as business income. A blessing, advice, performance of a religious ceremony, etc., may be defined as a service." He added that this legal opinion was accepted by new Attorney General Menachem Mazuz as well.

The attorney general presented Abuhatzeira's attorney with the following instructions:

"As long as the client's income is subject to taxation and he is the owner of a business which renders services, he is legally obligated to pay tax as the director of business services according to the order of the Income Tax Authority and the added-value law. That is, he must keep records, withdraw payment from the source, and provide relevant reports." All that remains is for tax officials to take advantage of this new opportunity provided them by two attorneys general. For example, they might send investigators to receive blessings in return for payment, and sue mystics who fail to provide a receipt.

The government claims that Rabbi Yekutiel Abuhatzeira, a descendent of a distinguished rabbinic dynasty and a son of the Baba Sali, owes NIS 9.5 million in back taxes.