Four homes and a kindergarten that serves African refugees were firebombed last night in south Tel Aviv. The homes were were occupied and damage was done, but the refugees were able to escape unharmed. 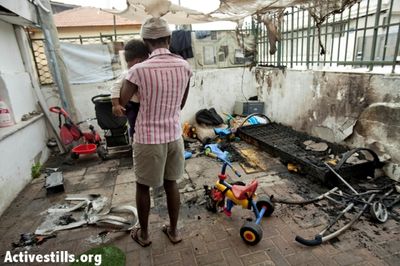 The remains of the torched kindergarten's play area

Four homes and and a kindergarten that serves African refugees were all firebombed last night in Tel Aviv. The refugees escaped unharmed.

Police found several unused firebombs near the one of the homes and are investigating the attack.

Israel +972 reports that many local residents believe the attacks are racially and religiously motivated:

While refugees are uncertain about the identity of the attackers, Israeli residents of [the] Shapira [neighborhood of south Tel Aviv] are all very certain that this was a racial attack. In addition to the neighbor interviewed above, several other neighborhood activists said that this is a culmination of a dangerous process that’s been going on for quite some time. “There is racist propaganda that comes down from the government, through members of the Municipal Council, and to the street – and this is the result,” accuses Nir Nader, a resident who is planning a solidarity vigil later on today. “People preaching violence should be in prison, and if the state doesn’t stop them – we shall.”

Who are the people at the forefront of preaching this racist propaganda?

As has been reported many times over the past two years, Orthodox and haredi rabbis.

But the government of Benjamin Netanyahu will take no action, because these rabbis and their political parties control the fate of his coalition government, and because Netanyahu himself is not a compassionate or caring man – let alone a man concerned with the rule of law.

Four homes and a kindergarten that serves African refugees were firebombed last night in south Tel Aviv. The homes were were occupied and damage was done, but the refugees were able to escape unharmed.