Why Metzitzah B’Peh Must Be Banned Immediately

The direct oral to genetal suction done by the mohel to the baby's open circumcision wound is dangerous and must be banned immediately. 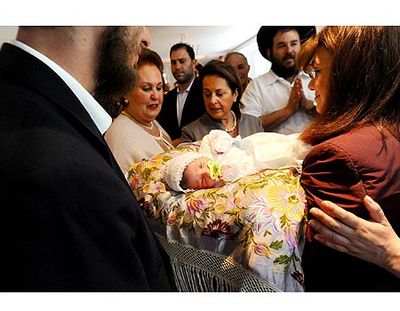 Why Metzitzah B’Peh Must Be Banned Immediately
Shmarya Rosenberg • FailedMessiah.com

The Maharam Schick was a leading student of the Hatam Sofer, the arch-traditionalist who fought the nascent Reform Movement. The Maharam Schick continued the Hatam Sofer's work and his arch traditionalism. He was a strong advocate of keeping metzitzah b'peh (MBP), the direct oral to genital suction done by the mohel to the baby's open circumcision wound, despite the prevailing medical opinion of his day that found it to be unsanitary and unseemly.

In a teshuva (Orach Hayyim 152)* he made several points:

1. We have no evidence of disease transmitted by MBP. No mohel he knew reported any post-circumcision diseases related to MBP.

2. Doctors rely on probabilities which are really estimates.

3. Halakha relies on truth given to us by God through Moses his prophet.

4. There is a halakhic principle: Whenever a life is at risk, we do not rely on probabilities [meaning that, for example, even if it is more likely that breaking Shabbat law to drive a person to an emergency room is unnecessary and it is safe to wait until Shabbat ends to get him treatment, we still break Shabbat laws and drive him to the emergency room immediately, and this is true even if the possibility he will die if we don't drive him now is very small].

5. MBP protects the health of the baby. That's what God told us through Moses. Therefore we must keep doing it.

6. Even if doctors were correct that gauze or a sterile tube worked as well as MBP, we could not change because, in the end, what they say is only probability, and whenever a life is at risk, we do not rely on probabilities.

In a different teshuva (which has no direct citation for some reason) he writes:

How outrageous it is for those self-proclaimed wise men [leaders of the jewish community in that place] to dare to abolish the requirement of the Talmud and the halakhic rulings of all the codifiers because of theories spouted by some contemporary doctors.…We maintain in halakha that when there is even the slightest risk to life, we ignore what happens most of the time [and err on the side of protecting life]. If the doctors were to claim that not even one in millions would be endangered by lack of metzitzah…the statement would be meaningless because they have no way of knowing [what will happen to a particular baby beforehand, or if a dead baby died from MBP, meaning their best work is really merely guessing]. Our sages, however, were concerned for even a minuscule risk; if even one in millions of babies were at risk, it would be permissible to desecrate Shabbos for him [meaning if the possible risk to life arose on Shabbat, we would intentionally desecrate Shabbat law to bring him to a doctor or by heating water for him, etc.]. Thus we are obligated to suction the blood away, for in a case of even remotely possible danger to life, we ignore what happens most of the time [i.e., that lack of MBP does not hurt the child the vast majority of the time]. Moreover, doctors can only base themselves on past experience, on investigation, and on experimentation, which are also forms of experience. None of these methods is absolute, all imply the possibility of exceptions.…

This was written in the first half of the 19th century when science and medicine was far, far less advanced than they are now, and before the syphilis and tuberculosis outbreaks that sickened many people – including babies who got sick from MBP-transmission and who died.

But the Maharam Schick's main point is clear: even if there is a tiny risk to life, we act to eliminate that risk.

We now can show that MBP transmits disease. We can see and test for the microbes that cause it and we can trace disease transmission in a much more precise and accurate way than the Maharam Schick could ever have imagined.

Herpes Simplex Virus 1 (HSV-1) infections at the MBP site have killed babies and left at least one child brain damaged. (This is far more certain than what many haredi rabbis claim.)

Every infant who gets HSV-1 will have it for life and will in all likelihood transmit it to many others. Some of those ohers will become very ill. Some some will even die. And all of them and everyone they give HSV-1 to will carry HSV-1 for the rest of their lives. Other diseases, including but not limited to STDs,  can also be transmitted through MBP, as well.

Even according to the arch traditionalist the Maharam Schick, "whenever a life is at risk, we do not rely on probabilities" – we must do what is necessary to save that life.

And that means we must ban MBP immediately.

But what if MBP is more than a protective procedure done to protect the baby's health? What if it is an actual part of the mitzvah of circumcision? Would we still stop doing it now that we know it is dangerous? Would the Maharam Schick's "one [death] in millions" be enough to stop MBP? Would his "whenever a life is at risk, we do not rely on probabilities" still apply? And why would anyone think MBP is an integral part of the circumcision ritual that if missing would invalidate it?

I'll deal with those questions in part two of this article, which I hope to post later today.

* The translation above is taken from Sancity & Science – Insights Into the Practice of Milah and Metzitzah, by Y. B. Goldberger, a Bobover hasidic mohel, and published by Feldheim. The book is a tract in defense of MBP. Any material in square brackets [ ] is mine. The numbered points above are based on a translation in that book, as well.

Posted at 11:03 AM in Circumcision, Haredim, Med-Ethics, Public Health | Permalink

Why Metzitzah B’Peh Must Be Banned Immediately

The direct oral to genetal suction done by the mohel to the baby's open circumcision wound is dangerous and must be banned immediately.