Gabriel Sandler before his first haircutting. He was murdered today along with his older brother, his father and a classmate.

Here’s a look at the victims, based on material from police, family and friends:

— Imad Ibn-Ziaten, 30, was a paratrooper in the 1st Airborne Transportation Regiment based in Toulouse. He was shot dead the afternoon of March 10 behind a school by a helmeted gunman on a motorcycle, according to police sources.

— Abel Chennouf, 25, served in the 17th paratrooper combat engineering regiment based in Montauban, not far from Toulouse. His father said Chennouf toured in Afghanistan from August to December 2008. Chennouf was at a bank machine with two comrades when a helmeted gunman on a motorcycle shot him dead along with another soldier in Montauban on Thursday.

— Mohamed Legouad, 26, was the second paratrooper killed in the same shooting. Military officials said he had served in French operations in Africa.

— Rabbi Jonathan Sandler, 30, taught at the Ozar Hatorah Jewish school in Toulouse. He had been a pupil at the school as a child, then moved to Israel to study, and then moved back to Toulouse to teach. He was shot and killed when a lone gunman on a motorcycle opened fire on the school Monday.

— Gabriel Sandler, the rabbi’s 4-year-old son, was a pupil at the nearby Gan Rachi school of Toulouse.

— Arieh Sandler, the rabbi’s 5-year-old son, was also a pupil at the Gan Rachi school.

— Miriam Monsonego was the 7-year-old daughter of the principal of the Jewish school where Monday’s shootings took place.

Here are pictures of today's dead: Above: Gabriel Sandler before his upshurnisch Above: Arieh Sandler at age 5 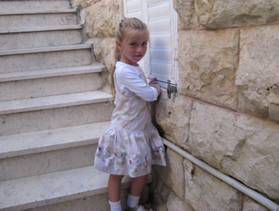 Gabriel Sandler before his first haircutting. He was murdered today along with his older brother, his father and a classmate.