Told that the man who tortured her wore a yarmulke to court for the first time Monday, Jodi chuckled. “That makes me laugh,” she said. 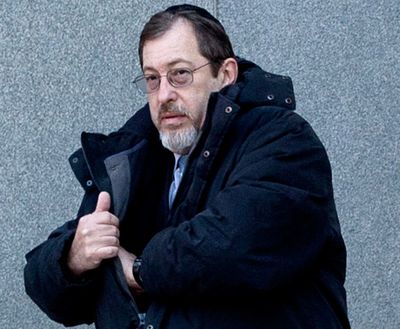 A former sex slave turned the tables on her tormentor in a Brooklyn court Monday, delivering a verbal lashing before a judge sentenced him to eight years in prison.

“I walk around and carry the physical scars of the torture you put me through. The cigarette burns, the knife carvings, the piercings,” the woman, referred to in court simply as Jodi, told Glenn Marcus.

“How a human being can see humor in the torture, manipulation and brainwashing of another human being is beyond comprehension. You have given me a life sentence.”

Marcus, 58, had appealed his sex trafficking and forced labor conviction all the way up to the U.S. Supreme Court, which sent the case back to Brooklyn for resentencing.

Facing more than 20 years for torturing Jodi after she tried to break off their master-slave relationship, Marcus asked for a nonjail sentence so he could care for his elderly mother in their suburban Long Island home.

“I suffer from nightmares in which I wake up reliving the horror of what you did to me,” Jodi said through a speakerphone in Brooklyn Federal Judge Allyne Ross’ courtroom.

“You, Glenn Marcus, have single-handedly destroyed my life; your self-centeredness, your hatred and extreme violence toward women has impacted my life.”

Jodi later told the Daily News she had been eager to confront Marcus in person, but an ear infection barred her from flying in from her new home out of state.

“He has no remorse, no regret and no sympathy. That’s who he is,” she said. “I don’t think he’ll ever change.”

Told that the Svengali she met on the Internet in 1998 wore a yarmulke to court for the first time Monday, Jodi chuckled. “That makes me laugh,” she said.

She used to call Marcus “God” — he called her “It” — but now, she says, she sees him as “evil personified.”

After they met, they played consensual games until the summer of 2001, when she tried to leave and he unleashed horrible violence on her in the basement of a friend's house in Hewlett, L.I.

During the 2007 trial, Jodi testified he went medieval on her: he hogtied her and suspended her from a ceiling pipe, pierced her tongue with a surgical needle, whipped her and left her hanging for hours.

The attacks continued when he sealed her inside a garment bag, mutilated her genitals, stuffed a plastic ball in her mouth and carved the word “slave” in her abdomen and his initials into the soles of her feet, she said.

After the graphic trial, Marcus was sentenced in 2007 to nine years in prison.
His conviction was reversed in 2008, and he was released from prison on $1 million bail on Jan. 7, 2009. Before Monday, he had been living at home.

Home confinement with his mother would be an “insult to the continuing injury of the victim,” Chen argued.

She said Marcus is likely to continue participating in bondage and S&M activities, which makes him a continued danger to nonconsenting victims.

Then the judge sentenced Marcus to eight years, revoked his $1 million bail and had him hauled off in the custody of U.S. marshals.

His 82-year-old mother, Belle, who told the judge in a sealed letter that she does not want to live with her other son in Pennsylvania, will go to a nursing home.

Nearly five years ago, Marcus rejected a plea deal that carried no jail time, insisting the sex games were consensual.

Jodi said she was pleased Marcus was back in prison.

“Although nothing can compensate for what he did to me, I am very satisfied with the sentence,” she told The News.

Told that the man who tortured her wore a yarmulke to court for the first time Monday, Jodi chuckled. “That makes me laugh,” she said.