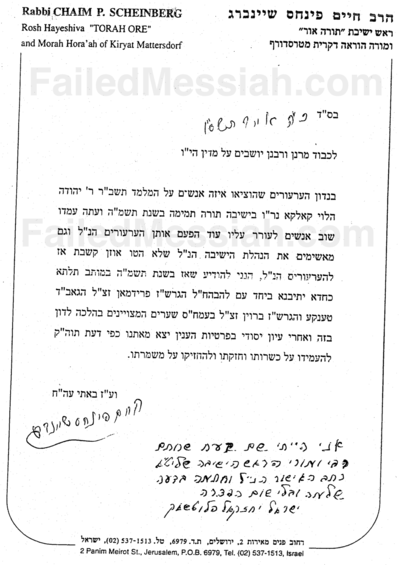 Kolko, a notorious pedophile, pleaded guilty more than 20 years later to endangering the welfare of two children who were not yet born when Scheinberg ruled.* Other victims out of the statute of limitations also have come forward including David Framowitz, who says Kolko molested him 42 years ago.

Note that despite all the additional evidence against Kolko amassed over the 21 years between the beit din and this letter, Scheinberg does not change his ruling.

Also note that the letter does not give the halakhic basis or reason(s) for finding Kolko innocent. It just states that he is innocent and that Kolko's employer, Yeshiva Torah Temimah in Brooklyn, acted properly. The letter does not contain any of the embarrassing details of that 1985 ruling – a ruling Scheinberg made himself and coerced Rabbi Brown (see below) to reluctantly go along with. Rabbi Friedman (see below) refused to give in to Scheinberg's demand and did not agree with the ruling.

Rabbi Scheinberg died yesterday in Jerusalem and was buried today. He was 101-years-old.

People who heard Scheinberg explain the beit din ruling in 1985 say Scheinberg claimed that because Kolko did not penetrate his victims, there was no actual abuse according to halakha. They also say that Scheinberg forbade them from reporting Kolko to police or giving any information related to the case to the media. Scheinberg told them it would violate the Jewish laws against mesirah, informing, and lashon hara, talebearing and spreading gossip.

Here is a translation of Scheinberg's 2006 letter:

With the help of God:

Let it be known that, in the year 5745 [1985] when the three [judges or the beit din, religious court] sat as one, I sat together as one with the sage Rabbi S. Z. Friedman, the head of the Tenka Beth Din; and the sage Rabbi S. Z. Brown, the author of The Gates of Excellence in Halacha, to adjudicate this matter.

After a thorough delving into the minute details of the matter, we concluded in accordance with the wisdom of our holy Torah to reaffirm his [Kolko’s] standing of innocence and determined that he shall retain his job as a teacher.


I was present at the time that my teacher and master the head of the yeshiva, may he live long and good days; wrote the above confirmation and he signed it with full faculties without any undue influence.

* The D.A.'s office apparently told police involved in the case that the families had, on thier own, decided not to allow their sons to testify in court, and that was the basis for offering Kolko a plea bargain to lesser charges. That guilty plea was entered after the families of the two victims were, by their own accounts, lied to by the D.A. and tricked into agreeing to the plea bargain only to find out aterward that the D.A. had lied to them. Both families told The Jewish Week they wanted to go to trial and that they were angered that the D.A. had lied to them and manipulated them.

Not long after, the D.A. launched Kol Tzedek, a program to allow haredi sex offenders to be reported directly to a Jewish liasioin at the D.A.'s office and not to police or child protection services.

The D.A. has used Kol Tzedek to hide the names of almost 90 haredi men reported to it since 2009 and to hide the resolution of their cases. When pressured by activists and journalists, the D.A. claimed the information of the pedophiles could not be released because it would identify the victims – a position legal scholars and activists reject out of hand, noting among other things that the law provides for withholding victims' names, not pedophiles' names, and that who point out that non-haredi sex offenders name's are released by the D.A. all the time.

Tzvi Gluck, a well regarded haredi community activist who deals frequently with police and the D.A., said publicly on a Jewish community radio show that he knew what had been done with these cases of haredi pedophilia. The rabbis and the D.A. had fixed the cases, allowing many pedophiles to walk free while pleading others out to misdomeanor charges (like Kolko) to keep them off the sex offender registry.

Gluck also spoke about a haredi rabbi who told a victim's family that, becuase their son had not been penetrated by the haredi pedophile, there was no sex abuse according to the Torah.