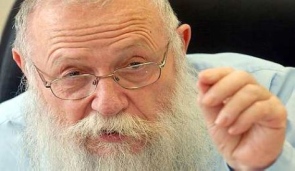 The rabbi, one of the founders of the hesder yeshiva program that allows religious individuals to combine Torah study with army service, was granted the honor due to his "important work in the field of religious-Zionist education," according to the awarding committee.

"In his sensitivity and love for the people of Israel, he has worked towards bringing the sectors together," the panel wrote.

Druckman's accomplishments include founding the Or Etzion religious military preparatory school, leading the rabbinical conversion court and establishing program for the absorption of immigrants from Ethiopia and the former Soviet bloc.

Druckman was born in Poland in 1932, and survived the Holocaust. In 1944, he managed to make aliyah, later followed by his parents. He studied at Jerusalem's Mercaz HaRav Yeshiva under the venerable Rabbi Zvi Yehuda Kook, and was considered one of his most outstanding students.

In 1954, he was among those who initiated the hesder program, which integrates yeshiva students within the IDF. He continued to head the program for many years. He later founded the Or Etzion Yeshiva, a religious military academy unlike any other at the time.

In the early '80s, Druckman pioneered the formation of the rabbinical court for conversion, with the aim of accommodating olim from the former Soviet Union who wished to covert to Judaism and integrate in society.

In the years 1977-1989 and 1999-2003 Druckman served a member of the Knesset. His government positions included religious affairs minister and member of the Foreign Affairs and Defense Committee, among others.

In 2004, he accepted then-Prime Minister Ariel Sharon's request to coordinate the State's Judaism conversions. He has filled this post until earlier this year.