Taxpayers would be forced to pay millions of dollars each year for busing kids from yeshivas that have after-hours academic programs under a plan quietly floated by Senate Republicans. 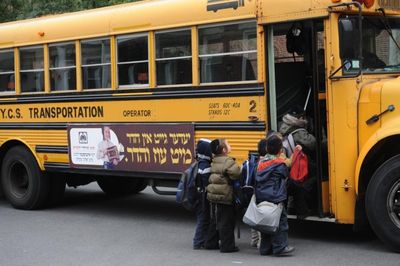 ALBANY — Taxpayers would be forced to pay for busing kids from yeshivas that have after-hours academic programs under a plan quietly floated by Senate Republicans.

The state and city already split the cost of busing kids to private schools during the regular school day.

But over the objections of Mayor Bloomberg, the Senate GOP wants to go further by requiring bus service for schools that offer classes until at least 5 p.m.

According to Bloomberg aides, 25 yeshivas and three charter schools would qualify at a cost of $3 million to the city and state under the GOP plan.

Costs are expected to soar in future years as more yeshivas and private schools stay open longer to take advantage of the change.

“In a difficult time of budget cuts, when the city is struggling to protect core services, it defies imagination that the Legislature would create expensive new mandates to benefit specific groups,” said Bloomberg spokesman Mark Botnick.

The little-noticed proposal in the Senate’s recent budget plan is said to be gaining traction in negotiations among state leaders.

Critics call it an election-year gift to the influential Brooklyn Jewish community at a time when the GOP is battling to claim a seat that used to belong to convicted ex-Sen. Carl Kruger — a charge Senate officials deny.

Leiby Kletzky begged his parents to be allowed to walk home alone rather than take the day camp bus, and after the murder haredi community spokespeople argued that choice was perfectly reasonable. Borough Park was safe, they and many haredim claimed.

Yet, somehow, that murder – committed by a member of their own community, a fellow Jewfrom a haredi family who worked in a haredi business and, while not perfectly observant, went to shul and participated in community events – now serves as the pretext to give yeshivas more free busing?

Taxpayers would be forced to pay millions of dollars each year for busing kids from yeshivas that have after-hours academic programs under a plan quietly floated by Senate Republicans.