A car belonging to Aron Rottenberg -- the New Quare dissident targeted and seriously burned in a May arson attack — was intentionally set ablaze Thursday night despite promises made by Skvere officials in an out of court settlement with Rottenberg last month. 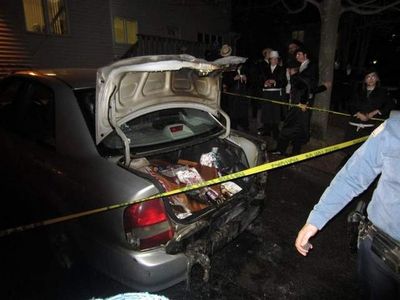 NEW SQUARE — A car belonging to Aron Rottenberg -- the dissident member of the Hasidic community targeted and seriously burned in a May arson attack — was intentionally set ablaze Thursday night.

By the time police arrived moments later, the fire had been extinguished. No injuries were reported.

The arson fire started with someone lighting either paper or cardboard under the trunk near the gas tank, Ramapo Capt. Brad Weidel said this morning. He said the criminal charge is third-degree arson if someone is caught.

Weidel said Rottenberg told detectives that he doesn’t believe the arson was related to the previous problems with New Square religious leaders or the attacks on him and his property at his Truman Avenue house. He was staying with relatives on Jefferson Avenue last night when the fire occurred.

“Mr. Rottenberg feels that this is not connected to the previous incidents between him and New Square,” Weidel said. “It’s natural you would think there’s some connection. He’s adamant. He doesn’t believe that’s the case.”

Weidel said detectives are looking to interview witnesses and any suspects who started the fire.

The Ramapo Police Department and the Rockland County sheriff’s arson unit are investigating the incident.

The attack follows what many believed was the conclusion of difficult ordeal for the Rottenberg family.

On May 22, the Rottenberg home in New Square was attacked because Aron Rottenberg refused to pray in Grand Rabbi David Twersky’s Truman Avenue synagogue.

Rottenberg suffered third-degree burns to over 50 percent of his body as a result of the attack, burns that left him hospitalized for weeks.

Shaul Spitzer, who has admitted to throwing an incendiary device at Rottenberg, setting him on fire, pleaded guilty to first-degree assault, a felony, on Feb. 7.

Spitzer’s plea came as part of an agreement that ended Rottenberg’s civil lawsuit. It is believed that another element of the agreement includes Rottenberg receiving about $2 million in compensation from supporters of Spitzer and Grand Rabbi David Twersky.

Spitzer, 18 at the time of the attack, lived with Twersky, working as a type of butler.

Spitzer, still being held, is to be sentenced by state Supreme Court Justice William A. Kelly on April 17. He faces a maximum of 10 years in state prison. Kelly has already indicated that Spitzer will likely receive a sentence of at least five years in prison.

Rottenberg says this latest attack isn't linked to all the previous attacks because he has that settlement with Spitzer and the Rebbe.

A car belonging to Aron Rottenberg -- the New Quare dissident targeted and seriously burned in a May arson attack — was intentionally set ablaze Thursday night despite promises made by Skvere officials in an out of court settlement with Rottenberg last month.