A Bedouin resident of southern Israel was arrested by Israeli police and charged last week with serving as an accomplice to a criminal organization that kidnapped Eritrean and Sudanese nationals in the Sinai Peninsula and extorted their families for ransom. 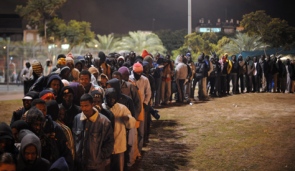 A Bedouin resident of southern Israel was charged last week with serving as an accomplice to a criminal organization that kidnapped Eritrean and Sudanese nationals in the Sinai Peninsula and extorted their families for ransom.

The indictment Yusuf al-Qarnawi was presented by Israel's State Prosecutor's Office Be’er Sheva District Court on Friday and elucidates the alleged inner workings of the gang.

According to the charges, al-Qarnawi was approached in June 2011 by two alleged kidnappers, one a resident of Sinai and the other from the Gaza Strip, who requested his help in picking up ransom from family members of people they had kidnapped.

Al-Qarnawi was allegedly told to call the family and friends of the asylum seekers kidnapped in the Sinai and receive the ransom payment, according to the indictment, after which he handed the money over to the kidnappers.

The indictment goes on to elaborate the gang’s alleged mode of operation. In June 2011, they allegedly kidnapped an Eritrean citizen, held him captive with another 70 prisoners, all blindfolded. During his captivity, he was starved, beaten, and forced to call his family and ask that they pay a $25,000 ransom, under threat of death.

Shortly after, al-Qarnawi sent his brother to pick up a $15,000 ransom from the victim’s family. A day later, they allegedly demanded the family hand over an additional $10,000.

In another case presented in the indictment, two Eritrean women were abducted. They were held chained in captivity in a house with another 40 other kidnapped persons. While in captivity, they were starved, beaten with sticks and tortured by electric shock. One the kidnappers raped one of the woman, says the indictment.

The indictment says that the kidnappers demanded $40,000 for each of the women, threatening that were they not to receive the stated ransom in full they would remove their kidneys and sell them instead. To show the families the seriousness of their intent, the kidnappers would call the victims’ families and let them hear their cries. Al-Qarnawi picked up the ransom for these two victims in person.

“The Sudanese and Eritrean citizens travel through the Sinai on their way to Israel. In the Sinai there are families that specialize in smuggling. They charge them money to get them across the border," he said. "About a year ago, these families decided to institutionalize the practice – they started hold the refugees captive and demand ransoms from them ranging between $39,000 to 40,000."

“The refugees held by them are given an opportunity to call their families and friends in Israel," said Asor. "At a later point the kidnappers threaten the kith and kin and have them listen to them torture their loved ones.”

“There is a well-oiled system of kidnappers from Gaza and Sinai, working in concert with money changers in Hebron," he added. "They reached Al-Qarnawi. He was in transport and knew traders in Gaza, that how they found him. They would send him to meetings in Tel Aviv to pick up the money. After the money was received they’d free the prisoner. Al-Qarnawi confessed his part in five cases, but we believe there are many more. There are family members that are afraid to file complaints with the police because they are illegal aliens.”

A Bedouin resident of southern Israel was arrested by Israeli police and charged last week with serving as an accomplice to a criminal organization that kidnapped Eritrean and Sudanese nationals in the Sinai Peninsula and extorted their families for ransom.